Mashi is a Ninja Prisoner NPC in Brig Rock.

Mashi, Hashi, Zashi, and Steve were traveling through Gnarled Forest and fighting Stromling Admirals when they were caught by Captain Jack Knife and his Pirates. Angered that there were Ninjas in his jungle, Captain Knife had them locked up in Brig Rock. However, Captain Knife did acknowledge that he did learn from the four Ninjas that the best way to beat a Stromling Admiral was to wait for it to sink its anchor before attacking it from the side.

Mashi was locked up in a cell in Brig Rock. Although Ralphie Brig-Eyes knew it was important to feed his prisoners, he was unable to do so after being pinned down by Swabbie the Monkey, causing Mashi and the other Ninjas to starve. Luckily, they are fed bananas by players completing a mission for Ralphie. Eventually, they are freed by players who have a Maelstrom Hammer and a Ninja Dummy.

Now a Rescued Ninja, Mashi and his three fellow Ninjas traveled to the Perilous Path in Forbidden Valley, where the foursome offer helpful tips to players as thanks for being freed.

During alpha testing, Mashi wore a Black Ninja Hood, which is still reflected in the mission for feeding the four Ninja Prisoners. Additionally, he had a bandage over his left eye. From late beta testing until the Crux Prime update, his red Ninja Gi was changed to a white Ninja Gi. Mashi was originally unnamed and simply called the "Ninja Traped". To better characterize Steve, one of Mashi's lines of dialogue involving a banana was exchanged with Steve's respective line. 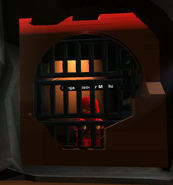 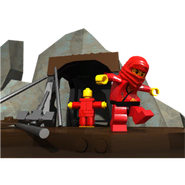 Mashi escapes Brig Rock
Add a photo to this gallery
Retrieved from "https://legouniverse.fandom.com/wiki/Mashi?oldid=110831"
Community content is available under CC-BY-SA unless otherwise noted.