Master Fong Shader is a Paradox Sensei who oversees the Hidden Dojo in the Great Tree in Forbidden Valley.

In his youth, Master Fong Shader was the apprentice of Kenjin the Wise. During their training, they took myriad trips to visit Dragonmaw Chasm.[1]

Originally, the Something in the Maelstrom mission chain did not include Wisp Lee. Master Fong Shader sent players to bring a scroll, which indicated a presence in the Maelstrom, to the Paradox Refinery so that Echs Ray could analyze the data. 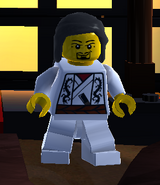 Master Fong Shader talking to players
Add a photo to this gallery
Retrieved from "https://legouniverse.fandom.com/wiki/Master_Fong_Shader?oldid=133051"
Community content is available under CC-BY-SA unless otherwise noted.