Melodie Foxtrot is a Sentinel Faction Agent NPC who investigates the Maelstrom Mine.

Melodie Foxtrot followed the Maelstrom Spider Queen to the Maelstrom Mine. There, she meets up with players and loans them Rank 2 Daredevil, Space Marauder, Summoner, or Knight Trial Faction Gear while they smash Dark Spiderlings in hopes of finding five clues regarding the Spider Queen's whereabouts. She learns that the Spider Queen has been sending postcards from the Block Yard property and sends players to inform Beck Strongheart of this revelation.

Melodie Foxtrot remains in the Maelstrom Mine to fight the Dark Spiderlings. She assigns a mission to players to smash ten more Dark Spiderlings once they join a Nexus Force Faction, this time without any loaned Trial Faction Gear.

In alpha testing and very early beta testing, Melodie Foxtrot had a red standard ponytail, a different face texture, a dark-blue Girl's Midriff Jacket, dark-blue pants, and an Ice Saw. Since Melodie Foxtrot did not open the Avant Gardens Survival Instance during alpha testing, players could earn their Sentinel Stamp from the Gnarled Forest Survival instead. Her missions involving Green Imaginite were added post-release when mini-games were altered to require these crystals.

Melodie Foxtrot also taught players about the use of Green Imaginite Crystals, telling them that these crystals are required to play mini-games. She also explained that Imaginite is highly concentrated Imagination infused into bricks and speculated that the Mythrans may have something to do with their origin. When she ran out of Green Imaginite Crystals for new recruits, she asked players to buy ten crystals from Klaus Zett, only to realize that she already has extra Imaginite in her pockets.

After the Power of the Nexus Force update, her original role was given to Beck Strongheart and she was given an entirely different role in the Maelstrom Mine. 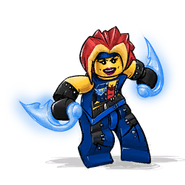 Melodie in alpha and early beta 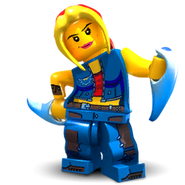 Melodie prior to the Power of the Nexus Force update 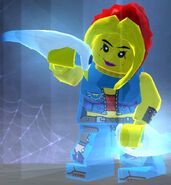 Melodie in her current location. 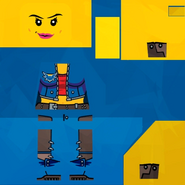 The Postcard Bug
Add a photo to this gallery
Retrieved from "https://legouniverse.fandom.com/wiki/Melodie_Foxtrot?oldid=112727"
Community content is available under CC-BY-SA unless otherwise noted.