Milo Snackpigeon is an NPC found at the gate of Red Blocks.

Milo Snackpigeon was invited to a Pants Party, but lost his pants and even his legs, forcing his torso to hide in a bush. He asks players to buy him Party Pants, which can be purchased from Dominic Knack. As a reward, Milo gives players a Water Sprayer part, which is required for Mardolf the Orange to assemble a Water Sprayer for players. After receiving the Party Pants, Milo Snackpigeon jumps out of the bush, puts on the pants, and performs a Russian Dance. When he is finished, he tosses the Party Pants up into the air.

In alpha testing, Milo Snackpigeon was named "Naked Minifig". He had yellow hip and leg pieces, suggesting that he was fully nude. Naked Minifig hid behind a 2x2 brick-shaped bush. However, because many alpha and beta testers opposed the idea of a fully nude Minifig barely obscured by a bush, he was altered in mid-beta testing to his current appearance. In mid-beta testing, he was called "Embarrassed Minifigure".

As of the Nexus Jawbox update, Milo Snackpigeon's Party Pants are white. Because the icon for the Party Pants is still purple and numerous other NPCs, notably Arrrthur Arrrbuckle, have been inexplicably given white clothes, this was likely a glitch. It since has been fixed.

Milo prior to the Nexus Jawbox update, in which his black hair was lightened 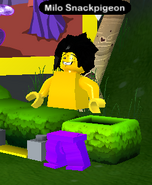 Milo hops into his Party Pants

Milo performs a Russian Dance in his Party Pants 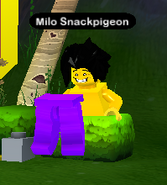 Milo jumps out of the Party Pants

Milo tosses the Party Pants into the air
Add a photo to this gallery
Retrieved from "https://legouniverse.fandom.com/wiki/Milo_Snackpigeon?oldid=134216"
Community content is available under CC-BY-SA unless otherwise noted.