Mission 18 is the eighteenth mission of The Great Minifig Mission.

Players must guide Hael Storm through a dark maze to the emerald at the end. Players move Hael using the Arrow Keys. The maze is completely black except for the emerald and a small area around Hael illuminated by his torch. The torch is lit for a finite amount of time, and when it burns out, the mission is failed. There are several Stromlings and pitfalls hidden within the maze, and encountering one will result in a mission failure. Players can determine the locations of Stromlings by looking for sinister purple eyes glowing periodically in the darkness. When Hael Storm reaches the emerald, the scene fades and a plaque describing Venture League appears. The plaque contains a code written in minifigure alphabet which players will need to translate. Entering the code will allow minifigs to enter the LEGO Universe.

"Exploration is truly the essence of imagination."

Use the arrow keys to overcome the perils of the maze and help Hael find the treasure before his torch dies out. Be warned, the darkness is not your only enemy! 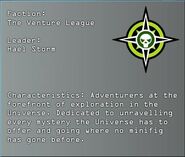 Venture League information
Add a photo to this gallery
Retrieved from "https://legouniverse.fandom.com/wiki/Mission_18?oldid=77230"
Community content is available under CC-BY-SA unless otherwise noted.