Mission 19 is the nineteenth mission of The Great Minifig Mission.

Mission 19 is a modified form of Minesweeper. Players control Vanda Darkflame in an area that bears semblance to Maelstrom Trench. The area is divided into a twelve-by-thirteen grid, with Vanda Darkflame in the lower right corner and the Paradox symbol in the upper left corner. Players must click on any square adjacent to Vanda to guide her to the Paradox symbol. These squares may be in any direction, including diagonal. Upon moving to that square, a number will appear, revealing the number of Stromlings hiding in squares adjacent to that particular square. If Vanda runs into a Stromling, she loses a life. If she loses all four lives and is attacked again, the mission will be failed. If players successfully guide Vanda to the Paradox emblem, a plaque will appear describing the Paradox faction. The plaque also contains a code written in minifigure alphabet, which must be translated and entered into the code box to send minifigs into the LEGO Universe.

"Smashing does not determine who is right - only who is left."

Click on the squares to help Vanda find a safe path through the Stromling valley. Her ninja instincts will warn you of nearby danger, but be careful. Stromling contact will weaken Vanda's life force. 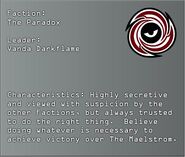 Paradox information
Add a photo to this gallery
Retrieved from "https://legouniverse.fandom.com/wiki/Mission_19?oldid=77231"
Community content is available under CC-BY-SA unless otherwise noted.