When the Skeletons, led by Nuckal, General of Lightning, destroy a chunk of the Ninjago Monastery and send it flying into space with Sensei Wu aboard, Crux Prime gets a surprise when the chunk crashes into it. Sensei Wu discovers that Skeletons are mining the Maelstrom Ore from Crux Prime's crust, and sends Neido, a Spinjitzu Ninja, to investigate.

When Neido arrives, he saves Brannan Landers from skeletons, displaying Spinjitzu to the Sentinel Knight. Brannan wants to pay homage to this mysterious ninja rescuer, and sends players to find him in the Monastery Ruins, where Neido is trying to hold back repeated attacks to destroy them.

Sensei Wu has left Neido with 10 scrolls describing the history of Ninjago, as well as Neido's logs and accounts of his current adventures on Crux Prime. The winds have scattered them during a Skeleton attack, and Neido sends players to find all 10 and bring them back.

Once players have done this, he senses they can be trusted, and lets them read the scrolls. With a laugh, he rewards them with a Double-Bladed Imagination Dagger, to utilize a form of Spinjitzu he has developed, inspired by the beacon of hope from Nexus Tower. He begins to teach them Imagination Spinjitzu, which he has found proves very effective against skeletons.

He then sends them to blow up 10 Bone Fracture Bombs to hinder the mining effort of the Skeletons. Without the bombs, he hopes that they will not be able to mine as quickly; but to his sadness, they barely notice. He then sends players to smash 3 Skeleton Engineers, rebuild Skeleton Growlspeakers into Record Players, and knock out a Skeleton Drilling Rig.

Confused by its purpose, he asks them to see Coalessa to learn about the Dragon. When they meet her, she sends them to Mardolf the Orange, who sends them to dig up 10 bones from Crux Prime.

Should players return to Neido, he has a new mission for them. Sending them to confront and smash Nuckal head on, he hopes to find the reason for the mining on Crux. The crystal retrieved from Nuckal is too confusing, and he asks for Paradox's help at the Paradox Refinery.

Echs Ray is more than happy to analize the crystal in his machine, and discovers a grave secret. Fearing the worst, he sends them back to Neido; who reveals Echs' bone-chattering discovery - the Skeletons are mining Maelstrom because it protects them from Spinjitzu! He begins offering daily missions to slow down their efforts before they lay another siege on the Monastery.

Later, Brannan becomes thirsty and asks players to make him some Imagination Tea from Neido. Neido, missing the comforts of his home, is already setting up to work. Smashing Aura Blossoms, he sends them to collect 10 to make tea. Once they return, he shares some which players can take back to Brannan. If they choose to drink the tea, they will have to make more. 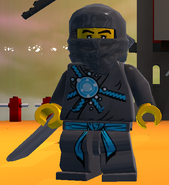 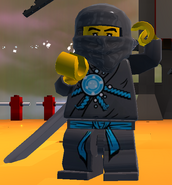 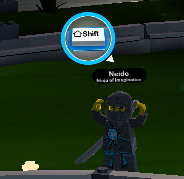 Retrieved from "https://legouniverse.fandom.com/wiki/Neido?oldid=160244"
Community content is available under CC-BY-SA unless otherwise noted.