The Nexus Jawbox was a console in Race Place where players could donate bricks to the construction of Nexus Tower. The Jawbox was added on May 3rd, 2011 and removed on June 1st, 2011 after the tower was completed and opened. The word "Jawbox" was a pun on its appearance, including two sets of "jaws" and a tongue which was supposed to represent that the box was "alive".

There were 6 passport rewards covering the donation of 10,000 bricks, and a daily mission (A Donation a Day) to donate 50 bricks. Nexus Jay offered another mission to introduce players to the Jawbox, while Kurt Tussle offered the daily mission. A Nexus Force Plaque rested beside the jawbox to show how many people had donated bricks, Nexus Tower's progress, and the top donators.

The Jawbox was released with a contest to build Nexus Tower. The contest was to get the community in spirit for the upcoming release of Nexus Tower. The contest was run on each regional server, and could be won by the 20 top donators across all three; not, as later contests turned to, the top ten on each server.[1] The build progress meter on the Nexus Force Plaque rose by 3% each day, regardless of the number of donations.

The Jawbox was opened May 3rd, 2011. On the Storm server, a glitch appeared with the name, calling it "Object_37500_Name". On the Overbuild server, the name still remained "Nexus Jawbox". On June 1st, 2011, it was removed. However, its ajoining plaque was saved, and rested beside the Nexus Tower Launchpad across from Kurt Tussle for the remainder of LEGO Universe.

A screenshot of a player donating bricks

The Jawbox on the Overbuild Server 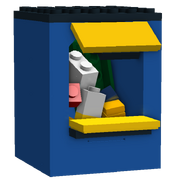 The Jawbox's predecessors, a simple box. It was redesigned sometime before release.

The make-shift launchpad dock, which the bricks from the Jawbox were sent to Nexus Tower from 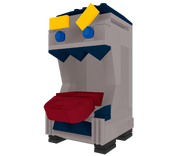 Retrieved from "https://legouniverse.fandom.com/wiki/Nexus_Jawbox?oldid=154211"
Community content is available under CC-BY-SA unless otherwise noted.