After they receive their Specialty Kit, players report back to Nexus Jay. Feeling a little thirsty after talking to new recruits all day, Nexus Jay teaches players about Faction Tokens and asks players to buy him a Faction Supply. Hearing about trouble in Gnarled Forest, Nexus Jay sends players to travel to the jungle world and check in with Hugo First. Alternatively, Nexus Jay offers players the chance to fly to Nexus Tower and meet their Faction Leader, checking in with Kurt Tussle along the way.

In alpha testing and early beta testing, Nexus Jay was unnamed and instead identified by his title of Nexus Force Recruiter. He wore a Dwarf Helmet and early Assembly Faction Grunt shirt and pants, and had a very different facial texture featuring a prominent mustache. Although he was changed to his final model in mid-beta testing, Nexus Jay did not receive his clipboard and pen until late beta testing.

Prior to the Power of the Nexus Force update, Nexus Jay had a significantly smaller role, as he sent players to speak with the four Faction Reps instead of sending players himself to speak with Mardolf the Orange and Johnny Thunder. Logan Moonshot originally offered Head to Gnarled Forest, while Silas Penumbra originally offered the Hammer and Anvil mission chain. When the Faction Reps were removed in the update, these roles were bestowed upon Nexus Jay. 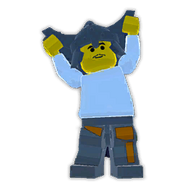 A beta rendering of Nexus Jay with a blue Cadet Helmet 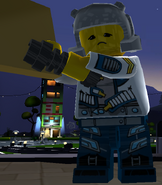 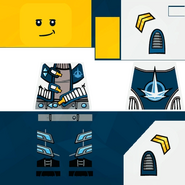 Silas's mugshot is still used on the Mission Tracker
Add a photo to this gallery
Retrieved from "https://legouniverse.fandom.com/wiki/Nexus_Jay?oldid=132298"
Community content is available under CC-BY-SA unless otherwise noted.