The Nexus Temple was an ancient structure on Planet Crux home to the Imagination Nexus, created by the First Builders and inhabited by their Mythran descendants.

Duke Exeter, Hael Storm, Doctor Overbuild, and Baron Typhonus located the Nexus Temple by using the Imagimeter in the Venture Koi, which detected the Imagination Nexus within. Upon landing on the planet, the four explorers entered the temple and began using the Imagination Nexus to create their favorite things. Baron Typhonus, wanting to demonstrate the powers of chaos, created the Spider Boss. The Spider Boss nearly attacked the three heroes, but instead turned on Baron Typhonus, dragging him into the Imagination Nexus and creating the Maelstrom. The Maelstrom then shattered the Venture Koi floating above the temple, and its pieces fell down in and around the temple, nearly crushing the remaining explorers. Doctor Overbuild used the pieces of the Venture Koi to build a cap to contain the Maelstrom, but this backfired, as the Maelstrom then shattered the entire planet, doing severe damage to the Nexus Temple. The Imagination Nexus was later relocated to Nexus Tower, and the piece of land where the Nexus Temple once stood became Crux Prime.

It is likely that the ruins of the Nexus Temple are located on the inaccessible side of Rivendark Canyon. The nearby Nexus Force Plaque makes note of a large concentration of Imagination on the far side, and speculates it may be caused by the presence of Mythran. Prior to the Nexus Tower update, the Nexus Force Plaque also stated that Assembly hoped to construct a way across the canyon once Nexus Tower was completed. Additionally, both a prototype map and the 3D models for the far side of Rivendark Canyon label the area as "Ruins". The area is accessible if the player has a Jet Pack or uses a Macro Code to teleport to it, but it is unfinished and barren, only consisting of flat terrain with scattered rocks.

Rough 3D models of the Nexus Temple were created by some of the game's environment artists, as an idea for a future addition to the game, potentially containing a boss fight.[1] While the ideas never developed further, the temple can be seen in-game if objects 8247 and 8251 (the temple interior and exterior) are spawned. 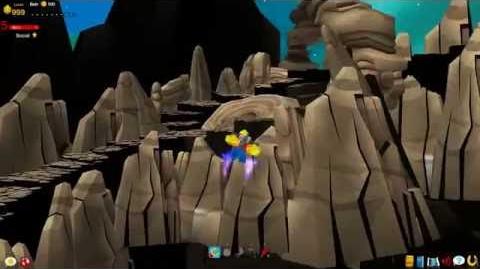 Retrieved from "https://legouniverse.fandom.com/wiki/Nexus_Temple?oldid=159802"
Community content is available under CC-BY-SA unless otherwise noted.