Nimbus Plaza is the central hub of Nimbus Station where players are able to join a Faction by speaking to each faction's respective vendors. Because it intersects so many paths and worlds, it has a natural tendency to become a social hub among players. For this reason, it has extensive signage to guide new players to new locations and worlds.

Almost every world is accessible through Nimbus Plaza, with the exception of the Ninjago Monastery, Crux Prime, Return to the Venture Explorer, and the LUP Worlds.

Nimbus Plaza was extremely similar in alpha and beta. Many of the NPCs used Pre-Alpha models, or incomplete models of their current figures. The "Join a Faction" mission path was much different, although no NPCs were in different locations. During mid-beta, all NPCs recieved their current looks. One difference was that the Nimbus Station Greeter was replaced by Nexus Jay.

During the August 2011 "Power of the Nexus Force" update, Ellgren Stackwell, Dirk Manleigh, Logan Moonshot, and Silas Penumbra were removed from Nimbus Plaza, as the "Join a Faction" path had changed once again, no longer requiring them.

In the September 2011 "Ninjago: Masters of Spinjitzu" expansion, Shouty McBullhorn was added to Nimbus Plaza to tell players about the Ninjago Monastery and Nexus Force Championships.

Location on the Map 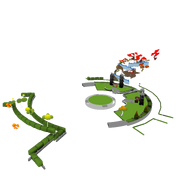 A very early version of Nimbus Plaza
Add a photo to this gallery
Retrieved from "https://legouniverse.fandom.com/wiki/Nimbus_Plaza?oldid=142778"
Community content is available under CC-BY-SA unless otherwise noted.