"Look at you! Geared up and ready to go! Why don't you start with some new adventures right here in Nimbus Station!"- Nexus Jay

Nimbus Station is the third world in LEGO Universe. It is the hub of the Nimbus System, with launchpads to every main world except for Crux Prime and the Ninjago Monastery.

Mardolf is found in Brick Annex, where he rewards players with a Rocket module and challenges them to build a new rocket with it. After doing so and receiving Mardolf's approval they return to Nexus Jay. To get approval from Venture League, players are sent to see Johnny Thunder, who can be found at the Red Blocks amphitheatre. Johnny Thunder challenges players to find three Treasure Chests around Nimbus Station, to test their exploration skills. After collecting all three chests, Johnny Thunder gives players his approval, and they are sent back to Nexus Jay to choose what faction to join.

After choosing one of the four Nexus Force factions, players are sent to their respective faction vendor in Nimbus Plaza to receive a free kit containing Rank 1 gear of a Specialty of their choice. Now a complete Nexus Force member, players are able to go to Pet Cove, Gnarled Forest, Forbidden Valley, Nexus Tower, and Starbase 3001.

Additionally, players are also able to take on a variety of side missions given by the various inhabitants of Nimbus Station. Mardolf the Orange asks players to find the pieces for a water gun, which can be used to tame a Pet Skunk. To get the pieces for the water gun, players must aid Rad Eccles in shooting down a supply crate stuck in a tree, purchase pants for Milo Snackpigeon, and retrieve a flying disc toy for Coalessa in Pet Cove.

In the Race Place, Velocity Lane introduces players to racing on Nimbus Station's Vertigo Loop racetrack, and players can buy items from various vendors, or fly to Nexus Tower. Players can also go back in time with the help of Wenn Wuzzit, and defend Nimbus Station from a Maelstrom attack that has already taken place. If the player is a LEGO Club member, they can also visit LEGO Club Station Alpha from the LEGO Club Door at Red Blocks.

Nimbus Plaza is the central hub of Nimbus Station. On its outskirts are paths to the other various locations in the world, as well as launchpads to Gnarled Forest and Forbidden Valley. Within the plaza itself are four buildings, one for each faction of the Nexus Force. In booths next to the buildings are four faction vendors; Xeno Blueblade, Cog Blammo, Magnus Bumperdent, and Meldric Steamvalve. Nexus Force Barker Shouty McBullhorn also resides in the plaza, giving missions to passing players. The center of the plaza contains a grassy circle, where players can chat, trade, and show off items.

Brick Annex is a waterfront group of Assembly buildings, and home to Mardolf the Orange. Mardolf's assistant Rad Eccles is also found here, along with vendors Autumn Helix and Bruno Underbite, and Sentinel guard Burke Barrelchest. The launchpads to Nimbus Rock, Nimbus Isle, and Pet Cove are also located in Brick Annex, as well as the gate to Starbase 3001.

The Race Place contains the entry point to Vertigo Loop Racetrack, as well as the launchpad to Nexus Tower. Vendors Ludwig Clutchburn, Farnham Spoon, Leroy Duddsmith, and Cecil Eyetwitch all have booths in the Race Place, with foot race host Leland Hammertoe and Sentinel guard Kurt Tussle standing nearby.

Red Blocks is an amphitheatre where players can Quick Build various instruments to play music. Johnny Thunder stands near the path leading back to Nimbus Plaza, in an attempt to advertise himself to his "fans" attending the concert. In and around the concert seating, players can talk to Sofie Cushion, Skee Daddle, Peppy Slapbiscuit, Krista Clear, Kant Dance, Green Brockley, DeeDee Light, and Bjorn Fjord, some of whom give missions to the player. Also at the concert is vendor Dominic Knack, who sells an assortment of items. Nearby the concert stage, players can find the LEGO Club Door.

Nimbus Station originated as YouReeka, a skunk infested town which was an area (pocket) in Wonderland, a theme park inspired mash-up zone. YouReeka evolved into Zorillo Plaza, which evolved into Nimbus Station. While the skunk theme was largely dropped from the final world, skunk pets can still be found around Nimbus Plaza. The layout of the world changed remarkably little; the entrances to Avant Gardens, Gnarled Forest, and Nexus Tower are still in the same locations as where their counterparts were planned for in Wonderland, and the overall landscape is the same. The path to Spikes Peak ultimately became the path to the Red Blocks concert area (which had been transplanted from a previous version of Avant Gardens).

On December 1, 2010, Frostburgh was released, with its launchpad being located in Brick Annex, where the non-functional beta launchpad had once been located.

On February 8, 2011, a temporary launchpad to Crux Prime was placed on a platform in the Race Place, near the gate blocking off the area that would eventually lead to the Nexus Tower launchpad.

On February 23, 2011, The Battle of Nimbus Station was added to the game. The launchpad to Frostburgh was also removed at this time.

On May 3, 2011, at the start the construction of Nexus Tower, the Nexus Jawbox was added to the Race Place, near the gate. Several boxes and crates behind the gate were also added. Nimbus Isle, the medium sized property for Nimbus Station, was also released, with its launchpad being located where the Frostburgh launchpad once was.

On June 1, 2011, Nexus Tower's construction was completed, and the gate at the Race Place was replaced with a launchpad to the new world.

Until the update on August 9, 2011, the mission path for joining the Nexus Force was significantly different. Nexus Jay sent the player to four Faction Reps, Dirk Manleigh, Silas Penumbra, Ellgren Stackwell, and Logan Moonshot, who each then gave the player the task of getting approval from a faction. These four NPCs were removed, and their roles taken over by existing NPCs.

Data from Pod 1, publicized on November 12, 2009, referring to the world as Zorillo Station

The Nimbus Station launchpad at the beginning of Gnarled Forest 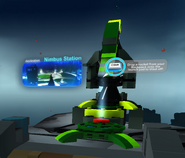 The Nimbus Station launchpad at the Great Tree in Forbidden Valley

The Nimbus Station map before the release of Crux Prime

The Nimbus Station map before the release of Nexus Tower

Add a photo to this gallery
Retrieved from "https://legouniverse.fandom.com/wiki/Nimbus_Station?oldid=160398"
Community content is available under CC-BY-SA unless otherwise noted.