Nuckal is the Skeleton Lightning General who oversees the Skulkin mining efforts in the Maelstrom Quarry.

After Lord Samukai's demise and Lord Garmadon's escape from the Ninjago Underworld, Nuckal and his platoon of Skulkins followed Sensei Wu to Crux Prime, where they discovered that Maelstrom weakened the powers of Spinjitzu, and began mining Maelstrom Ore to forge into weapons and armor.

Made of tougher bone than most Skulkins, Nuckal is the fastest and strongest Skulkin working in the Maelstrom Quarry, and will actively seek out and pursue players wandering through the area. He has about 105 health, and his Maelstrom Spinjitzu deals up to 6 damage to nearby players. However, after executing his Spinjitzu, Nuckal accidentally detaches his legs, forcing him to put himself back together and leaving him vulnerable to attack. Additionally, he stops attacking and begins to dance whenever a Skeleton Growlspeaker is rebuilt into a record player.

In an attempt to slow down the mining of Maelstrom Ore, Neido sends players to smash Nuckal. When smashed, Nuckal drops a Maelstrom Crystal that was mined from the quarry. Nuckal's Maelstrom Crystal is brought to Neido and then given to Echs Ray for analysis.

General Nuckal works for Lord Garmadon (the King of the Underworld), and he's always looking for trouble... and he usually finds it.

Nuckal likes to play games - sometimes silly, sometimes wild, but always dangerous. His lightning fast moves are shocking, and his laughs are electric. So, watch out ninja, because Nuckal can strike you down with his great big bone axe.

Nuckal is one of the Skulkin Generals serving under Lord Garmadon and formerly Lord Samukai. He plays a prominent role in the Ninjago storyline as one of the main villains of Ninjago: Masters of Spinjitzu, in which he is portrayed as comically incompetent as he and Kruncha attempt to recover the four Golden Weapons of Spinjitzu. Nuckal makes a playable appearance in LEGO Battles: Ninjago, which follows a similar storyline but portrays Nuckal as more competent. Nuckal was defeated by the Tornado of Creation in the Ninjago Underworld, trapped in a skeletal Ferris wheel. Nuckal also made appearances in the online mini-movies, most notably The New Masters of Spinjitzu.

When Crux Prime was first released, Nuckal's rare drop rate was significantly higher and many players farmed him because of it. This led to problems and fighting among players. In response to this controversy, the drop rate was lowered in a March 2011 patch.

Nuckal as a Skeleton Overseer 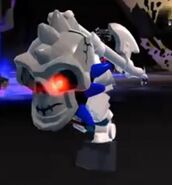 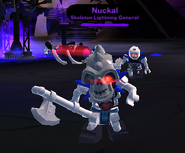 Nuckal as a Skeleton Lightning General 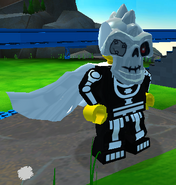 Objects_16051_name equipped by a player 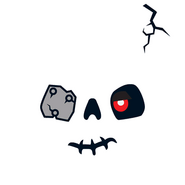 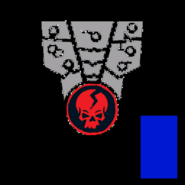 Nuckal's armor texture
Add a photo to this gallery
Retrieved from "https://legouniverse.fandom.com/wiki/Nuckal?oldid=158795"
Community content is available under CC-BY-SA unless otherwise noted.