Numb Chuck is a Paradox Agent NPC who resides in the highest branches of the Great Tree.

The only way to ascend to Numb Chuck's location is by smashing a special anvil with a Maelstrom Hammer and Quick Building an elevating platform. If players attempt to talk to Numb Chuck before proving themselves to the three Ninjas of the Hidden Dojo, Numb Chuck will refuse to give them a mission until they have completed the other Ninjas' trials. Once the trials of Smashmaster Foom, Gathermaster Klex, and Brickmaster Clang are completed, Master Fong Shader sends players to be trained by Numb Chuck, the most learned Ninja.

Numb Chuck gives players a Ninja Hood to travel beyond the Fallen Gate and complete his own test: to defeat a Maelstrom Dragon. When players return successfully, Numb Chuck rewards them with a Dragon Tooth as a symbol of strength and bravery. Then, Numb Chuck sends players to the Pirate Camp to retrieve the stolen Maelstrom Staff, letting players keep the weapon if they are successful. Later, Numb Chuck writes to players' Mailbox, explaining that he has ornithophobia. Finally, Numb Chuck presents players with the challenge of defeating Burnshout, Blastbreath, and Torchblight.

Seeing that players gain the trust of Vanda Darkflame, Numb Chuck reveals that Ninjas are skilled bankers and gives players a Paradox device to link their Property Safes to their Vault accounts.

Numb Chuck made his first public appearance as a Rank 1 Networker in My LEGO Network to promote the upcoming LEGO Universe. As the game was still in its pre-alpha phase, Numb Chuck's appearance and role are based more upon his pre-alpha self than how he appears in the final game. His description reads:

Numb Chuck leads a LEGO Universe ninja clan. After scouring the universe for the proper natural harmonies, he built his dream dojo within a forested canyon. Numb Chuck falls asleep at any hint of boredom, so he always seeks creative action. Singing karaoke is one of his beloved hobbies. Numb Chuck has recently been perfecting his karaoke version of the pop tune "Our Bricks are Sealed" (a fictitious parody on Our Lips are Sealed.)

Numb Chuck also appears in LEGO Rock Band, as a playable character unlocked by completing a gig the Volcanic Rock venue. As LEGO Rock Band was released in November 2009, nearly a year before the release of LEGO Universe, his appearance had not yet been redesigned, and he wears a simple black ninja outfit.

Numb Chuck is also mentioned in one of the randomly selected LEGO Legends displayed on the game's loading screens, where he is stated to be the most silent ninja in history, even creeping up on himself completely undetected. While his name is spelled as "Numb Chuck" on the rewards screen and in the Rock Shop, the loading screen instead spells his name as "Numbchuck".

In in early version of Forbidden Valley (originally considered part of Gnarled Forest), Numb Chuck was located in the Dojo in the Great Tree. The Ninja Sentry would have sent players to speak with him.[1] To protect players from the Maelstrom, Numb Chuck would have sent players to collect three Imaginite Shards from rocks outside the Great Tree, which Numb Chuck would have used to create a Maelstrom Helmet.[2] At this point, he wore a black hood and Gi, and his animations depicted him as sleeping. A ghostly version of Numb Chuck also appeared in this early version of Forbidden Valley, and was involved in a mission to Rebuild a Maelstrom Portal. While the details of this mission are unknown, leftover scripting shows it involved two Maelstrom Crystals and Maelstrom Gas, indicating the previously obtained Maelstrom Helmet was of use.

In beta testing, Numb Chuck gave an early version of Daily Missions in which he would offer players the opportunity to repeat the Slayer of Dragons mission.

Numb Chuck on My LEGO Network 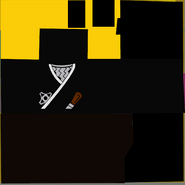 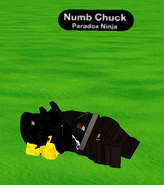 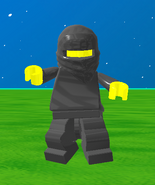 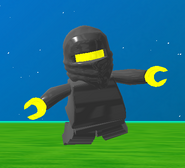 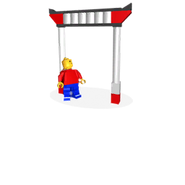 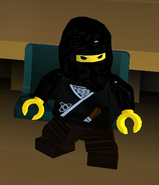 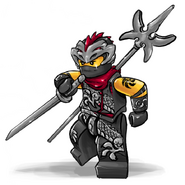 Numb Chuck prior to the Ninjago: Masters of Spinjitzu update

Numb Chuck with his new dagger and animations 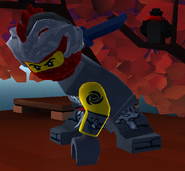 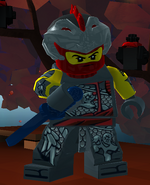 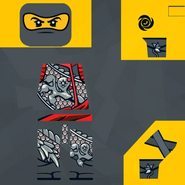 Numb Chuck spawned by a Mythran in Nimbus Plaza
Add a photo to this gallery
Retrieved from "https://legouniverse.fandom.com/wiki/Numb_Chuck?oldid=159221"
Community content is available under CC-BY-SA unless otherwise noted.