Nya, Ninja Kai's sister, is a Ninjago Vendor in the Ninjago Monastery. She sells weapons and gear related to the Ninjago content. Once players complete Cole's missions, Nya begins a chain related to purifying Maelstrom weapons. Nya is in love with Jay.

Nya asks players to get ahold of some blades from Skeleton Troopers so she can study them. Realizing that the weapons are not ordinary by either Maelstrom or Skeleton standards, she asks players to take them to Vanda Darkflame to examine them.

Vanda understands that the weapon is forged from the Maelstrom Ore which the Skeletons gathered from Crux Prime, and she sends players off with it to Echs Ray, who attempts to study it using his console. His machine is able to purify the weapon, and he says to take the schematics to Jay to create a portable machine.

Jay requires players to smash skeletons for the parts he needs to construct it. When he is finished, he winks at players and says to take it to Nya and ask her if she likes it. Nya is thrilled but says not to tell Jay that she thinks he's extremely smart, as she likes to keep him guessing.

Eager to test out the machine, Nya then offers 7 missions to gather weapons from various skeletons, including Frakjaw, which she purifies. When completed, she adds them to her inventory.

When Cringe Lo skips work to write a love note to Nya, he asks players to take it to her, because he is too scared. Nya turns him down, disgusted, as she only likes brave Ninjas. Later, he heads to the Cave of Black Echoes to prove his bravery and recover the paw of a Bone Wolf to impress Nya. Being too scared, he asks players to get him the paw. When he takes it to Nya proudly, she is scared out of her wits and turns him down again.

Once players learn all four forms of elemental Spinjitzu, Nya begins to vend new gear for each spinjitzu type.


"Nya is the sister of Kai (the Ninja of Fire), and she doesn’t understand why her brother should get to have all the fun. That’s why, even though she’s not a ninja, Nya is ready to fight. She has two fiery daggers… and she knows how to use them."

"Also, Nya’s favorite color is blue, and her favorite ninja is not her brother; it’s Jay, the Ninja of Lightning." 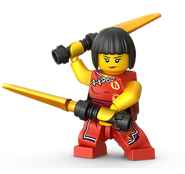 Nya, as seen in the LEGO Ninjago line

A glitched version of Nya 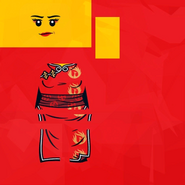 Nya's texture
Add a photo to this gallery

Retrieved from "https://legouniverse.fandom.com/wiki/Nya?oldid=160619"
Community content is available under CC-BY-SA unless otherwise noted.