The Outpost Console is a communication device used by the Sentinels.

Two Outpost Consoles can be found in Crux Prime, located on either side of the bridge connecting Sentinel Point Zeta and Rivendark Canyon. Unlike most Outpost Consoles, these devices lower the drawbridge and are not used for communication purposes.

In beta testing, the Outpost Console gave an early form of Daily Missions in which players could repeat Radio Free LEGO to earn more Coins. Unlike Daily Missions, repeating Radio Free LEGO was not restricted to only once a day. In late beta testing, this option was cut from the game and was not reimplemented until the Power of the Nexus Force update, in which it was changed into a Daily Mission version of Smash and Awe, a mission originally given by Beck Strongheart. 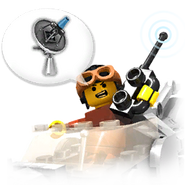 Render of official LDD model
Add a photo to this gallery
Retrieved from "https://legouniverse.fandom.com/wiki/Outpost_Console?oldid=125340"
Community content is available under CC-BY-SA unless otherwise noted.