LEGO Universe Wiki
Register
Don't have an account?
Sign In
Advertisement
in: Free To Play, Assembly, NPCs,
and 6 more

PRDX-7 is an Assembly Defense Robot who is positioned outside the Paradox Research Facility in Avant Gardens.

PRDX-7 escaped corruption when a massive explosion infected most of the Paradox scientists and Defense Robots. However, prior to players' arrival on Avant Gardens, PRDX-7 was badly damaged while defending the Research Facility.

By communicating with PRDX-7 via long-distance transmissions, PRDX-4 learns of PRDX-7's state and gives players Daily Missions to collect spare parts from smashed Stromling Mechs to repair PRDX-7. After he is repaired, PRDX-7 sends PRDX-4 a transmission confirming his repaired state.

PRDX-7 after being repaired 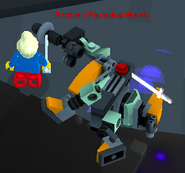