"Paradox seeks the secrets of the Maelstrom, to destroy it from within."- Vanda Darkflame

The Paradox is one of the four factions of the Nexus Force. Led by Vanda Darkflame, they specialize in the using the chaotic destructive power of the Maelstrom against itself. Paradox is the only faction in LEGO Universe whose leader was not one of the original Crux Explorers. Their color is red.

"The line at which the other Factions stop is where The Paradox plunge forward with abandon. Possessed of an insider's knowledge of the darker forces of the Universe, The Paradox are represented by Vanda Darkflame - an unpredictable, shadowy ninja girl, and former protégé of Baron Typhonus."

These members of Paradox were either cut from the game or moved to another faction.

A concept art of a Paradox racecar

A promotional print describing the faction

Baron Typhonus, with a Paradox-esque logo on his clothing 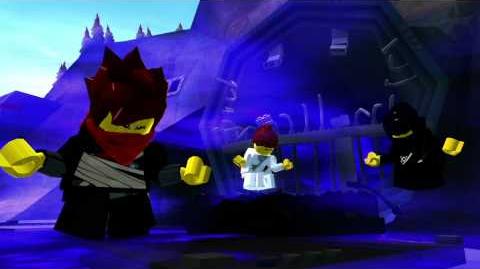 LEGO Universe "Paradox"
Add a photo to this gallery
Retrieved from "https://legouniverse.fandom.com/wiki/Paradox?oldid=160482"
Community content is available under CC-BY-SA unless otherwise noted.