Pet Cove is the fourth world in LEGO Universe. It is a somewhat small world that introduces players to pets and their special abilities.

The launchpad to Pet Cove is found in Brick Annex in Nimbus Station. Mardolf the Orange sends players to Pet Cove to find Coalessa and get a water sprayer piece from her.

Upon arriving on the world and crossing a bridge from the first island to the second, the player is shown a cutscene where a Seagull steals a flying disk toy Coalessa and her pet lion, Nancy, are playing with. The seagull takes the toy to the top of the lighthouse at the far end of the isle, and drops it in its nest.

Coalessa teaches the player how to tame pets, and once the player has tamed at least one of the three pets on the isle (the Bunny, Terrier, and Cat), they are able to use a Pet Bouncer to reach the third island where the lighthouse is. After repairing a bridge, the player reaches another Pet Bouncer that allows them to bounce to the roof of the lighthouse and retrieve the flying disc for Nancy.

After giving the disc back to Coalessa, she rewards the player with a spray gun part, and challenges them to tame more pets, eventually ending with the Lion.

Bella Pepper is also found on the third island near the lighthouse, and asks players to find her lost dog tags scattered around Pet Cove. She then teaches players how to dig up buried Treasure Chests with their pets.

Later in the game, Sentinel members are sent to Pet Cove to incubate a Gryphon egg in the Seagull's nest. Upon hatching, the player is able to tame the Gryphon pet on top of the lighthouse.

Early in the development of LEGO Universe, Pet Cove's role in the game was filled by Pet Ranch, a farm themed world. Pet Ranch was later renamed to Pet Rock, a name Pet Cove also used until early beta testing. 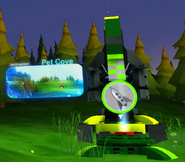 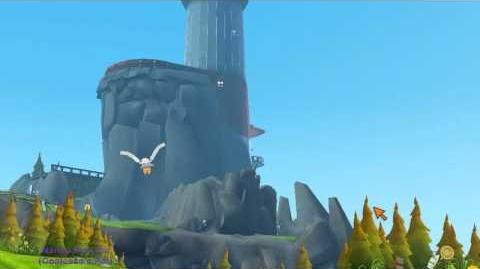