Pets are creatures found around LEGO Universe that can be tamed by a player. Pets can be used to dig up gold treasure chests, bones, and activate Pet Bouncers.

Pets cannot be tamed until the player talks to Coalessa in Pet Cove, who teaches how to tame pets. Once this is done, a pet can be tamed by interacting with it and completing a building puzzle. Once a pet is successfully tamed, the player can submit a name for it, which is either approved or rejected by the Mythrans. Until the name is approved, the describing text simply identifies the pet as belonging to the player (for example, "BizzareFlyingAmigo's Warthog Pet"). If and when the name is approved, it will appear above the pet for all players to see. If the name is rejected, the chance to rename it will be given next time it is brought out.

Overall, there are nineteen original pets. The chance to tame a lion comes a reward for taming the 18 other pets first.

These are the pets added since the initial release of LEGO Universe.

These are pets available to the corresponding faction with the release of Nexus Tower.

Hatchlings are miniature pets that can be equipped to the left hand. They follow the player around much like normal pets. Hatchlings were made available to players who purchased a LEGO Universe Game Card from 4 select stores, starting September 1st 2011. The Hatchling recieved varied by store. Hatchlings are the first reward available for players who purchase Game Cards, and come bundled with a bag of 50 faction tokens.[1] The data about the pet gamecard locations were posted incorrectly on LEGOUniverse.com. The correct locations are as shown.

The Pet Brick has eight studs and is red, expressionless, and lacks ears. In addition to digging up treasure chests like all other pets, the Pet Brick is advertised as being capable of fighting alongside players, giving advice to stuck players, and fetching players' slippers and newspaper. It also helps players build by holding onto pieces, moving heavy walls, fitting into almost any model, building at 80 bricks per second, and receiving instant model moderation. Additionally, the Pet Brick has a power stare attack that deals 9001 damage points, dislikes Ke$ha, is un-smashable, has brown 1x1 brick feces, and likes exclamation points.

Although advertised as coming out that April, the Pet Brick was merely an April Fools' Day joke and will not be released.

The Pet Brick standing beside a player 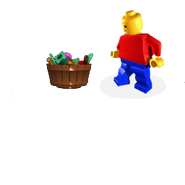 Pre-Alpha Mission asking you to Feed your pet 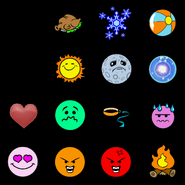 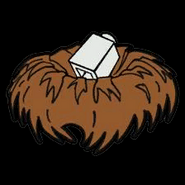 Alpha artwork for the never-implemented feature of pet nests

Retrieved from "https://legouniverse.fandom.com/wiki/Pets?oldid=160061"
Community content is available under CC-BY-SA unless otherwise noted.