Planet Crux was an ancient cube-shaped planet and the location of the Nexus Temple. When the Imagination Nexus was corrupted into the Maelstrom, Crux was shattered into countless smaller Worlds.

Crux was found by Duke Exeter, Hael Storm, Doctor Overbuild, and Baron Typhonus on their quest to find the last essence of pure Imagination in the universe. They explored the universe in the Venture Koi, using the Imagimeter to search planets for powerful sources of Imagination. They eventually reached Crux, where the Imagimeter located and activated the Imagination Nexus at the planet's north pole.

The four explorers left the Venture Koi floating above Crux, landed on the planet in a small detachable craft. There they found the Nexus Temple, and inside, the Imagination Nexus. Knowing legends that it could bring any idea to life, the explorers began imagining their most desired creations.

Baron Typhonus then betrayed the other explorers, using the Nexus's power to create the Spider Boss. But instead of attacking them, it turned towards Baron Typhonus and dragged him into the Imagination Nexus, corrupting it into the Maelstrom.

The Maelstrom destroyed the Venture Koi, and pieces of the spacecraft began falling towards the remaining explorers. Doctor Overbuild caught them, and used them to seal off the Maelstrom, trapping it inside Crux. The planet was unable to contain such a force, and exploded violently.

The three explorers recruited Vanda Darkflame to take the place of Baron Typhonus, and formed the Nexus Force to re-claim the remains of Crux from the Maelstrom. Nexus Tower was constructed on the largest planet chunk, Crux Prime, which was also the site of the original Nexus Temple.

According to content designer Chris Floyd, and early story info from a LUP,[1] Crux was originally envisioned as a normal round planet, with an infinite well/font of plastic at the north pole (the Nexus), and a curtain of infinite Imagination at the south pole (the Nimbus). The explorers who found Crux were the founders of the factions, but not the present day leaders, and there were eight explorers instead of four. The overall story was essentially still the same, though: One of them, Maestro (later renamed Baron Typhonus), corrupted the Nimbus into the Maelstrom, and became the Prisoner (later renamed the Darkitect) trapped inside the Maelstrom.

Players would have explored various zones on the planet, such as Nexus City (envisioned as the social hub), the Vanguard Outpost (the tutorial world for the Vanguard faction), and Port Plunder, as well as other zones based on classic or popular LEGO themes, and LUP-made zones. Zones were going to be accessed by going through portals, and the game was very non-linear; the Vanguard Outpost was designed with about 5 portals at the end for players to choose from. The team also wanted there to be big events to open portals to new zones when they were ready for release.

Player property wasn't envisioned as separate locations from the main zones at this point, and the team didn't want zones starting out being humongous and empty. The Maelstrom originated as a game mechanic to solve this issue: It was originally supposed to be a wall that encircled the zones, which was moved back to open up more player property as more players entered a zone and worked together completing gameplay challenges. After coming up with the Maelstrom, Chris started trying to think of a big baddie for the game, and came up with the Prisoner, who was one with the Maelstrom and could pop out at any time or spawn Darklings to make life more difficult. All the backstory with the Nexus, Nimbus, etc was then created around the gameplay concepts.

As development continued, the story was cleaned up and simplified. For a while in 2008, Crux was envisioned as a flat planet with the Maelstrom underneath it,[2] before eventually the idea of the cubic shape and explosion into smaller chunks was arrived at.

In late 2007, the team was trying to figure out what they could feasibly build and launch within the next year or so. They began developing a mash-up zone called Wonderland, with small pockets based on various themes, like a theme park. Wonderland was initially envisioned as a single zone in the game, set on Crux like the others (the term "world" for zones didn't come along until the idea of exploded planet chunks). From Wonderland, players could travel to Nexus City, which presumably would have served as a hub between other zones, such as LUP-made zones.

The concepts for Wonderland soon grew beyond their original scope as ideas piled up. While each pocket was initially intended as a small area with a different terrain type and main feature or two, they soon grew into full zones of their own. Eventually, it became apparent the scope of the game was too large and many of them were cut without getting very far past the concept art phase. The ones that had received the most development work evolved into the main planet chunks in the game at launch - Avant Gardens, Nimbus Station, Gnarled Forest, and Forbidden Valley. 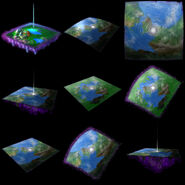 Concept art of Crux as a flat planet by Nate Storm

Concept art of Crux as a flat planet 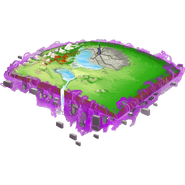 Concept art of Crux as a flat planet

Crux as a flat planet in a storyboard

Concept art of a Crux hologram

The Spider Boss pulling Baron Typhonus into the Imagination Nexus

The Nexus Temple is fractured as Crux explodes

Crux just before its explosion
Add a photo to this gallery
Retrieved from "https://legouniverse.fandom.com/wiki/Planet_Crux?oldid=160405"
Community content is available under CC-BY-SA unless otherwise noted.