For a short time in the beta, a glowing feather power-up was also in the game. When picked up it would give a speed boost similar to the Quicksicle. 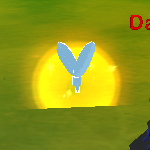 Power-ups effect concept art by Dave Kang
Add a photo to this gallery
Retrieved from "https://legouniverse.fandom.com/wiki/Power-ups?oldid=103866"
Community content is available under CC-BY-SA unless otherwise noted.