Rad Eccles is Mardolf's Assistant who works in Brick Annex.

In Brick Annex, Rad Eccles stands on the waterfront near the Skunkbuster statue. Rad Eccles requests help from players, explaining to players that a crate of supplies got caught in a tree near Red Blocks after being parachuted down to Nimbus Station. If players shoot down the crate and bring him the supplies, then Rad Eccles will reward them with a piece of the Water Sprayer.

After players help Rad Eccles in this mission, Rad Eccles offers a series of sixteen missions to increase backpack space in exchange for Blue Imaginite Crystals, which can be purchased from the nearby Model Vendor Autumn Helix. As the mission series progresses, Rad Eccles requests an increasing amount of crystals in order to complete each mission. When Rad Eccles has added a total of sixteen backpack spaces, he stops offering these missions. 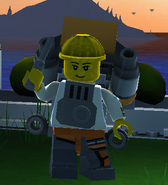 Rad Eccles in-game
Add a photo to this gallery
Retrieved from "https://legouniverse.fandom.com/wiki/Rad_Eccles?oldid=131996"
Community content is available under CC-BY-SA unless otherwise noted.