Although Ralphie Brig-Eyes holds a low opinion on Ninjas, he understands that it is his duty to treat his Ninja Prisoners humanely and make sure they get meals daily. However, Ralphie Brig-Eyes got pinned down by Swabbie the Monkey, who was madly firing a pistol. Unable to feed his prisoners, Ralphie assigns players to feed Hashi, Mashi, Zashi, and Steve bananas, and rewards players increased Imagination capacity for performing this task. He tells players that being a jailkeeper is a tough job, seemingly unaware that his four prisoners eventually escape.

In alpha testing and early beta testing, Ralphie Brig-Eyes had a different face and wore a white bandanna, torn sleeveless blue shirt, and light-gray pants. He was unnamed and simply called "Pirate Jailkeeper". In mid-beta, he received his current design, albeit with a classic-style White First Mate's Shirt and a darker black bandanna. 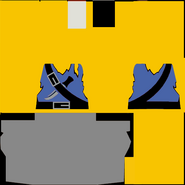 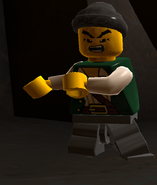 Ralphie Brig-Eyes in-game
Add a photo to this gallery
Retrieved from "https://legouniverse.fandom.com/wiki/Ralphie_Brig-Eyes?oldid=154497"
Community content is available under CC-BY-SA unless otherwise noted.