Red Blocks is the concert site that is the southern area of Nimbus Station. The door to LEGO Club is located here as wells as Nimbus Station's Imagination Brick, which can be attained by building all four concert effects into the same model, and then jumping to the top platform.

Red Blocks has four instruments for players to build - a guitar, keyboard, bass guitar, and drum kit. Each instrument has a selection of music loops that are played in a random order when the instrument is being played. DJ Studd also provides a background rythm track.

Red Blocks also has four effects that players can build - fireworks, lasers, a spotlight, and a loudspeaker. These appear in the form of smashable boxes which will cycle through the four effects until they are smashed and then built. Originally these took the form of Choice Builds, but were changed when choice builds were removed from the game.

The predecessor to Red Blocks was a dance floor in Nimbus Park, where the Beastie Blocks were found. When Nimbus Park was redesigned into Avant Gardens, the dance floor was redesigned into Red Blocks, which was located between The Monument and a Maelstrom-infected garden at the end of the world. When Avant Gardens was redesigned once more, Red Blocks was moved to Nimbus Station. Its design stayed relatively untouched, with the main difference being the addition of the LEGO Club Door where the path to the Maelstrom infected garden used to be located.

Concept art of the dance floor in Nimbus Park

The dance floor in Nimbus Park 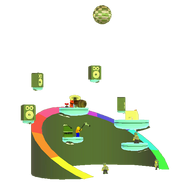 An early mock-up of Red Blocks

The Entrance to Red Blocks

Add a photo to this gallery
Retrieved from "https://legouniverse.fandom.com/wiki/Red_Blocks?oldid=158259"
Community content is available under CC-BY-SA unless otherwise noted.