Robbie Jibhanger is a Pirate Spy hiding in Forbidden Valley.

Robbie Jibhanger, Georgie Timbershivers, and Gary Grogowitz were given pieces of Captain Jack Knife's treasure map for safekeeping. However, the three Pirate Spies traveled to Forbidden Valley and got lost. Afraid of being caught by Ninjas, Robbie Jibhanger hid near a Maelstrom Horseman tomb in the Forbidden Passage.

When found, Robbie Jibhanger asks players to find him Pirate-Sized Ninja Clothes so that he can disguise himself as a Ninja and escape Forbidden Valley. After players purchase the disguise from Kammy Kazei, Robbie Jibhanger rewards them with his piece of Jack Knife's map. Demanding his privacy, he tells them to look away while he changes out of his pirate rags and into the Pirate-Sized Ninja Clothes.

When players return to the Forbidden Passage, Robbie Jibhanger will be gone, having presumably escaped Forbidden Valley in the Ninja disguise.

In early beta testing, Robbie Jibhanger was unnamed. Instead, he was identified as Lost Pirate 3, despite the fact that he is the second of the three Pirate Spies to be found.

In early beta testing, Robbie Jibhanger could be found hiding inside a smashable barrel, much like Toby Squidbarrel at the time. He was given a flintlock pistol in early testing, which was removed in mid-beta but restored in late testing.

Prior to the Nexus Jawbox update, Robbie Jibhanger wore light-blue pants. Since many other NPC clothes were turned white with this update, this is likely a glitch, but it was never corrected before LEGO Universe was announced to close. 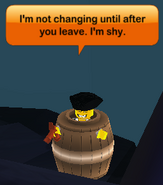 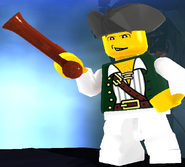 Robbie Jibhanger in-game
Add a photo to this gallery
Retrieved from "https://legouniverse.fandom.com/wiki/Robbie_Jibhanger?oldid=154599"
Community content is available under CC-BY-SA unless otherwise noted.