Rusty Steele is an Assembly Foreman NPC overseeing the construction of the Monument in Avant Gardens.

When not overseeing construction, Rusty Steele likes to relax at near the Pirate Camp of Gnarled Forest. However, his past three visits to Cannon Cove gave him a throbbing migraine from all the noise created by the Maelstrom armada, Kraken, and rubber ducks. Desperate for peace and quiet, Rusty Steele began a competition at the Cannon Cove Shooting Gallery for players to sink the Maelstrom armada and lessen the noise.[1]

The competition was a success, allowing Rusty Steele to return to his favorite spot on the beach for his much-needed vacation to quell his migraine. But on the night of August 24, 2011, the Maelstrom armada struck back, firing cannons at Rusty Steele's spot and nearly shooting his monkey butler Jeeves. Angered by this impunity and once again suffering from his migraine, Rusty Steele began another competition to sink more ships at Cannon Cove.[2]

Prior to the Crux Prime update, Rusty Steele was depicted as the representative of Assembly when players choose to join a faction.

Prior to the Power of the Nexus Force update, talking to Rusty Steele would activate the Monument Race. 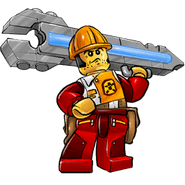 Rusty Steele in the "Answer the Call" trailer

Rusty Steele on the Assembly banner 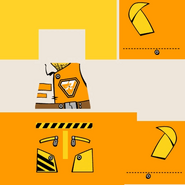 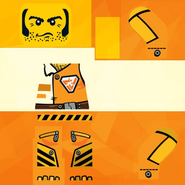 A player wielding Rusty's wrench
Add a photo to this gallery
Retrieved from "https://legouniverse.fandom.com/wiki/Rusty_Steele?oldid=157752"
Community content is available under CC-BY-SA unless otherwise noted.