Sensei Wu is a Ninjago Master NPC who resides in the Ninjago Monastery Courtyard.

When players arrive at the Ninjago Monastery, Sensei Wu sends them to Tomoko Moonstone to buy a Ki-Filled Hood, as they presumably have no Spinjitzu abilities. He then asks them to recover 5 Maelstrom Daggers from Skulkins in the Ninjago Battlefield and bring them back, hoping to learn more about them. He sends them to Nya to take a look at them.

Next, Sensei Wu tells them to learn Earth Spinjitzu from Cole. When Cole senses rumblings in the earth, he sends them back to Sensei Wu for the Scythe of Quakes. Wu tells them that he has hidden the entrance to the Ninjago Caves to stop the Skulkins from getting in. However, the Skulkins found another way in, and Wu sends players to find the entrance in the Ninjago Storeroom, find the Earth Shrine, smash Chopov, and recover the Scythe.

Next Wu sends players to seek out Zane and learn Ice Spinjitzu. Now looking for the Shurikens of Ice, players will soon be sent back into the caves by Wu to defeat Bonezai recover the Shurikens from the Ice Shrine. When they succeed, Sensei Wu sends them to Kai to learn Fire Spinjitzu.

Once Kai has trained players, Wu tells them to defeat Frakjaw in the Fire Shrine to recover the Sword of Fire. Once they do this, he thanks them for saving the weapons, and says that they ultimately saved Ninjago itself.

Sensei Wu originates from the LEGO Ninjago line, which receives much promotion through LEGO Universe.

Sensei Wu and his brother, Garmadon, were the two sons of the first Spinjitzu Master of planet Ninjago. While Garmadon turned to darkness and wanted his father's four golden weapons for himself, Sensei Wu sought to protect the four weapons and defeated Garmadon in battle, and Garmadon fell into the underworld. However, when Garmadon returned from the Ninjago Underworld with an army of Skulkins, Sensei Wu trained four ninjas to protect the legendary golden weapons. He was ultimately unable to stop Lord Garmadon from escaping the Underworld.

Sensei Wu was originally released with Crux Prime. As written in the Ninjago Scrolls, Sensei Wu and his ninjas fought the Skulkins as they laid siege upon the Ninjago Monastery. During the battle, a chunk of the Mount of Impossible Heights was broken off, carrying with it Sensei Wu. He was able to guide the chunk through space towards a beacon of light, Nexus Force's construction of the Nexus Tower on Crux Prime.

When the Skulkins attacked the Ninjago Monastery and hurtled a chunk of it into space, Sensei Wu guided a surviving chunk towards Crux Prime, in which he saw the beam from Nexus Tower. Shortly thereafter, a battalion of Skeletons, lead by Lightning General Nuckal, arrived on Crux Prime and began mining operations within the Maelstrom Quarry. They had been dispatched by Lord Garmadon, who had been informed that Maelstrom Ore provides increased resistance to Spinjitzu.

After arriving at Crux Prime, Sensei Wu lost ten Ninjago Scrolls describing the history of planet Ninjago. He saved Brannan Landers from a group of Skulkin, displaying his Spinjitzu techniques in the process. Brannan Landers sent players to find and speak with Sensei Wu at the Ruins.

Hearing that Sensei Wu brews Imagination Tea, Brannan Landers asked players to bring some back for him. In order to make more tea, Sensei Wu needed players to water Aura Blossoms located on Crux Prime and collect their tea leaves. This allowed Sensei Wu to activate the teapot in the Monastery Ruins.

Determined to find the cause of the Skulkins' mining activities, Sensei Wu instructed players to defeat Nuckal, the Skeleton Overseer, and collect his Maelstrom Crystal. Then, Sensei Wu sent players to the Paradox Refinery to analyze the crystal with Echs Ray. Players returned to Sensei Wu with the information that the Maelstrom protects the Skulkins from Spinjitzu.

Following the Ninjago: Masters of Spinjitzu update, the Crux Prime and Ninjago storyline was revised so that the Ninjago Monastery Ruins was no longer a chunk of of the Mountain of Impossible Hights, instead becoming an outpost overseen by Neido. Sensei Wu was moved to the Ninjago Monastery, passing his former role on to Neido. 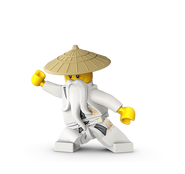 Sensei Wu, as seen in the LEGO Ninjago line

Sensei Wu, as seen in the LEGO Ninjago line 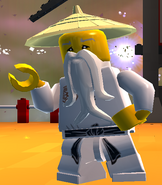 A glitched Sensei Wu, missing his hat, beard, and staff 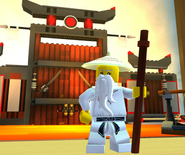 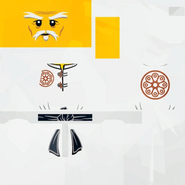 Objects_13101_name on a player
Add a photo to this gallery
Retrieved from "https://legouniverse.fandom.com/wiki/Sensei_Wu?oldid=159223"
Community content is available under CC-BY-SA unless otherwise noted.