The Shinobi is the Paradox's ninja-like warrior that devotes itself to the old arts of the assassin. It uses a modified version of the ninja's trademark weapon to launch a barrage of powerful strikes upon their enemies. However, these concentrated strikes make the Shinobi vulnerable to swarms of enemies, meaning they must rely on their widespread abilities to take on Stromling packs. It is the first Paradox kit to have melee weapons instead of long-ranged ones, like the Sorcerer and Space Marauder. The Shinobi was the last Paradox Kit to be released.

With the rank 2 Shinobi comes the Shinobi Shoulderpads. 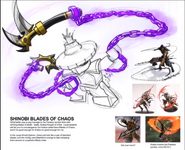 The Shinobi as seen in LEGO Club Magazine

Stats and Bonuses of the Rank 1 Shinobi

Stats and Bonuses of the Rank 2 Shinobi

Stats and Bonuses of the Rank 3 Shinobi 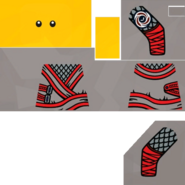 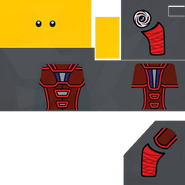 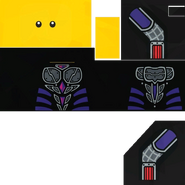 Shinobi Rank 3 Legs Texture
Add a photo to this gallery
Retrieved from "https://legouniverse.fandom.com/wiki/Shinobi?oldid=159900"
Community content is available under CC-BY-SA unless otherwise noted.