Silas Penumbra was the Paradox Rep in Nimbus Plaza.

When players first arrived in Nimbus Station, Nexus Jay sends them to speak to the four faction representatives, including Silas Penumbra, in order to receive faction badges and join Nexus Force. Silas Penumbra sent players to begin their research into the Maelstrom by collecting ten Maelstrom-infected bricks. Players will have to bring these bricks back to Silas, who will give them the Paradox Badge.

If players choose to join Paradox, Nexus Jay sent them to speak with Silas Penumbra again. Silas gave players a Rank 1 Paradox specialty kit of their choice and tell them to equip all four items in order to access the multi-item bonus.

Regardless of which faction they chose, Silas Penumbra sent all players to Forbidden Valley to forge a Maelstrom Hammer. When players return with the Maelstrom Hammer, Silas instructed them to smash an anvil outside the Paradox tower using the hammer, then rebuild the anvil into a device which exchanges Maelstrom-infected bricks for Faction Tokens. He requires players to make at least one exchange.

When the Nexus Jawbox was installed, Silas Penumbra began assigning new Daily Missions. These missions included smashing Stromlings in the Battle of Nimbus Station, smashing objects on the Monument, fighting enemies in Avant Gardens, scoring points in the Cannon Cove Shooting Gallery, smashing and building in Pet Cove, smashing smashables on the Vertigo Loop Racetrack, and competing in races.

Silas Penumbra was removed in the Power of the Nexus Force update. His role has since been succeeded by Wisp Lee, Nexus Jay, and Cog Blammo.

In alpha testing and early beta testing, Silas Penumbra required players to bring their Maelstrom-infected bricks back to Avant Gardens and give them to Wisp Lee, who would give players the Paradox Stamp. 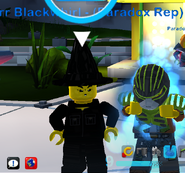 Silas's mugshot is still used on the Mission Tracker
Add a photo to this gallery
Retrieved from "https://legouniverse.fandom.com/wiki/Silas_Penumbra?oldid=131989"
Community content is available under CC-BY-SA unless otherwise noted.