Simon Soupspoon is a Pirate Cook NPC seen chatting with Bonny Belay in Gnarled Forest's Pirate Camp. He has no dialogue or direct role in the game and currently remains only a background character.

During the Nexus Force Championship Cannon Cove Shooting Gallery event, Simon Soupspoon provides heaping bowls of Squid and Swordfish Soup and healthy plates of Simon's Sharkbladder Surprise to hungry athletes, according to Captain Jack Knife in an interview by the Nexus Tower Tribune.[1]

In alpha testing and early beta testing, Simon Soupspoon was an unnamed pirate with the same face as the original Toby Squidbarrel, a classic-style First Mate's Vest, and brown pants. In mid-beta, Simon Soupspoon replaced this unnamed pirate, but he wore a white chef's hat instead of a red bandanna; he also had a cheerier expression.

Following the Nexus Jawbox update, Simon Soupspoon's light-gray pants have been changed to white. However, seeing as numerous other NPCs, most notably Arrrthur Arrrbuckle, have inexplicably been given white clothes, this may be an unintentional glitch. 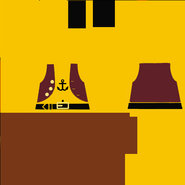 Simon Soupspoon in mid-beta testing
Add a photo to this gallery
Retrieved from "https://legouniverse.fandom.com/wiki/Simon_Soupspoon?oldid=100975"
Community content is available under CC-BY-SA unless otherwise noted.