"Fascinating! They build not with bricks, but with bones!"- Mardolf the Orange

Skulkin refers collectively to the Skeletons of the Ninjago Underworld. A large number of them are found on Crux Prime, where they have set up a mining operation in the Maelstrom Quarry for the extraction of Maelstrom Ore. The undead nature of the Skulkin makes them highly resilient to conventional weaponry. All Skulkin can perform a special brand of chaotic Spinjitzu capable of inflicting massive damage; however, performing this Spinjitzu stuns the said Skeleton for several seconds. They are also highly susceptible to all forms of Spinjitzu, including the Imagination Spinjitzu taught by Neido in the Ninjago Monastery Ruins. Armed with an arsenal of Maelstrom weaponry, they have renewed their siege on the Ninjago Monastery, with the goal of reclaiming the four Golden Weapons. 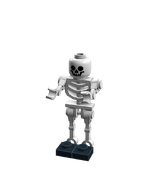 Skulkins in the Battle of Crux Prime 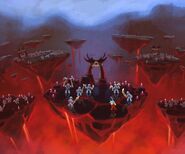 Concept art of Skulkins in the Fire Temple 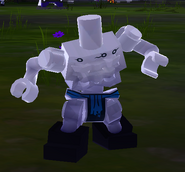 The headless Skulkin glitch
Add a photo to this gallery
Retrieved from "https://legouniverse.fandom.com/wiki/Skulkin?oldid=158629"
Community content is available under CC-BY-SA unless otherwise noted.