Smashmaster Foom is a Paradox Ninja who trains players in the art of smashing.

Although Smashmaster Foom was unnamed for most of beta testing, he was identified as the Smash Ninja in The Ninja Masters mission. Throughout beta testing, Smashmaster Foom wore a red Ninja star-patterned shirt and Red Pants. In early beta, Smashmaster Foom's dialogue was very blunt and filled with typical ninja fighting phrases, suggesting a very different personality in contrast to his released dialogue, which is very poetic in nature.

In the Nexus Jawbox update, Smashmaster Foom's face was changed, with notably wider eyes and a different expression. 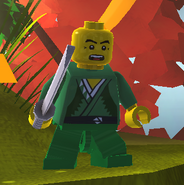 Smashmaster Foom in-game
Add a photo to this gallery
Retrieved from "https://legouniverse.fandom.com/wiki/Smashmaster_Foom?oldid=132776"
Community content is available under CC-BY-SA unless otherwise noted.