Snakes are serpentine reptiles that live in the LEGO Universe.

Snakes can be domesticated, as Peppy Slapbiscuit tamed his own pet snake, Nate the Snake. However, Nate the Snake escaped his cage and hid in a smashable in Nimbus Plaza. Players are sent on a Mission to find Nate the Snake and return him to Peppy, who decides to pass ownership of the snake to players. Players can then place Nate the Snake on their Properties.

Snakes were also unreleased test enemies not designed for any particular world in LEGO Universe. Known as Objects_7873_name, these snakes were supposedly designed to prove a dragon concept, according to ivantest.xml.[1] These snakes attacked by opening their mouths and shooting a blast in a similar fashion to Stromling Mech lasers, dealing one damage to players. Unlike Nate the Snake, who is modeled after the snake brick commonly found in LEGO sets, the enemy snakes are cartoonish in appearance and do not appear to be modeled after any actual LEGO elements. 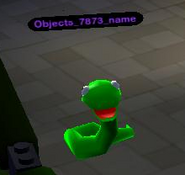 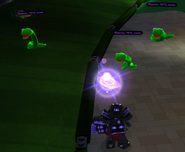 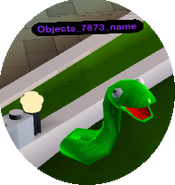 Another snake in Nimbus Station

The enemy snake 3D model
Add a photo to this gallery
Retrieved from "https://legouniverse.fandom.com/wiki/Snake?oldid=126697"
Community content is available under CC-BY-SA unless otherwise noted.