Specialties are sets of special items that give the player bonuses when worn together. Initially, Specialties were exclusive to certain Factions, but later updates added Non-Faction Specialties to the game.

Each Faction has three Specialties, and each Faction Specialty has three Ranks. In Avant Gardens, players are given multiple opportunities to borrow Rank 2 Trial Faction Gear, before later joining a Faction in Nimbus Station. When a player joins a Faction, he or she is given a free kit containing free Rank 1 Faction Gear of a Specialty of their choosing. Higher ranking Faction Gear, including Valiant Gear (advanced weapons and capes), can be purchased from vendors in Nimbus Station and Nexus Tower.

Sentinel Specialties have shielding abilities that protect the player from damage.

Paradox Specialties have powerful attacks and the ability to restore Imagination to themselves and nearby teammates.

Assembly Specialties can summon creatures or Quick Builds to aid them and restore Armor to themselves and nearby teammates.

Venture League Specialties can boost the speed of the wearer and display enemies and collectibles on the mini-map.

Non-Faction Specialties are available on Crux Prime, as Achievement or Mission rewards, or as random loot. Unlike Faction Specialties, they do not have ranks and do not always use every slot on the player's minifigure. 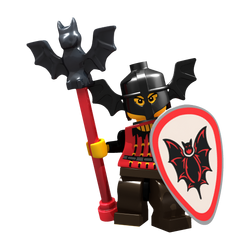 The Bat Lord is modeled after Basil the Bat Lord, a character from the 1997 LEGO Castle theme Fright Knights. It is unusual in that it has a focus on life rather than armor.

The Explorien Bot is modeled after Ann Droid, a character from the 1996 LEGO Space theme Exploriens. It gives the wearer stiff, robotic animations. 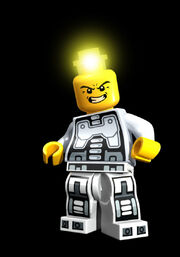 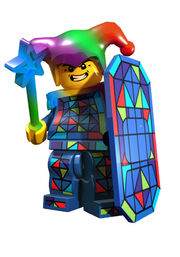 The Mosaic Jester is the only Non-Faction Specialty to use all slots on the player's minifigure. Its hat, shoulderpads, and wand cycle between various colors. 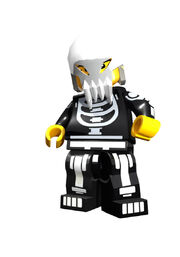 The Bone Suit is a costume that lets players dress as a skeleton. 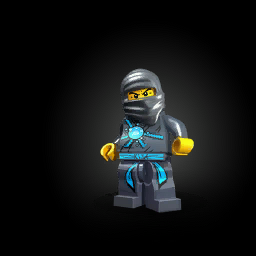 Imagination Spinjitzu gear is worn by Neido, the ninja of Imagination, and is given to players as they complete missions for him.

The Viking is an unreleased Sentinel Specialty only seen in concept art.

The Spy is an unreleased Paradox Specialty. In alpha testing, it was available in the place of the Space Marauder kit, though at that point in development the models and textures for the Faction Specialties had not been created and placeholder items were used instead. The Spy wore goggles and a backpack, and was armed with a knife as a main weapon and bomb launcher as an offhand weapon. 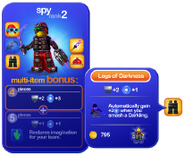 The Rocket Scientist is an unreleased Assembly Specialty only seen in concept art.

The Miner is an unreleased Venture League Specialty only seen in concept art.

Dragon Knight concept art by Jerry Meyer, for the Kingdoms World
Community content is available under CC-BY-SA unless otherwise noted.