"Welcome to Starbase 3001! Here you can travel to far off places created by LEGO fans!"- Hess LaCoil

Starbase 3001 is a world in LEGO Universe. It can be accessed through teleporter gates in Nimbus Station and Nexus Tower.

Upon arriving, players are greeted by Hess LaCoil, who explains that the starbase allows for travel to far off worlds created by the World Builder League. Hess then directs players to Forge Honcho, the captain of the starbase, who informs them that fast computers may be required to visit the worlds, and that they will be sent back to Starbase 3001 if they encounter any trouble.

Inside the starbase is a showcase displaying scenes from each of the four WBL planets, several large displays showing images from the worlds, and model vendor Nova Starbeam, who sells models created by LEGO Universe Partners.

Outside the starbase is a Rocket bay and a large yellow and blue launchpad which allows players to visit the four WBL worlds; Deep Freeze, Robot City, MoonBase, and Portabello.

Starbase 3001 was first opened late in beta testing, but closed shortly after and not officially released in the live game until November 9th, 2010. In the short time it was open in beta testing, the blue and yellow launchpad was instead a standard Venture League launchpad, and was intended to lead to the unreleased MBL Station. However, the launchpad hologram simply showed a graphic with the text "Under Construction", and the launchpad itself was not functional. The showcase in the center of the starbase also displayed various models created by WBL members, rather than scenes based on the worlds themselves. 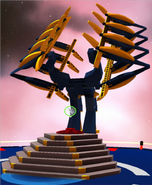 The WBL launchpad found on Starbase 3001

The Robot City model on display in Starbase 3001
Community content is available under CC-BY-SA unless otherwise noted.