Stromling Apes were first created when the Darkitect searched Gnarled Forest, looking for potential allies for his Stromling Pirate Armada in their battles against Captain Jack Knife and Venture League. During his search, he discovered an ape and was inspired to recreate the colossal creature as a menacing, aggressive Maelstrom servant. Stromling Apes have been known to ambush pirate travelers passing in and out of the Pirate Camp, and these Stromling Apes keep these pirates' parrots as loot.

A Stromling Ape makes its first in-game appearance in the log-in screen, where it roars at the player, walks around, and sits down. A courageous Minifig defeats this Stromling Ape by hopping into a cannon manned by another Minifig. The second Minifig fires the cannon, sending the first Minifig flying into the Stromling Ape, which is smashed into LEGO bricks as a result.

As mini-bosses, Stromling Apes have 25 Armor points in addition to 80 Life points. If an Ape is attacked to the point where its armor is depleted, it will be dazed for several seconds. The ideal way to defeat one is to build an anchor from the loose pieces often found lying around Apes during this period of being stunned. The anchor quick build unearthed by the Apes require 9 Imagination. The anchors do not smash Apes instantly when built, but instead deal 60-75 damage to their health, making the Apes considerably easier for players to battle. When defeated, Stromling Apes drop a wide variety of items, including various rare drops and Faction Tokens.

A Stromling Ape was responsible for smashing Kurt Tussle, causing the Nexus Force Guard to be assigned to gate duty. Before allowing players to travel to Crux Prime, Duke Exeter sends players to prove themselves by bringing back either a Stromling Admiral's anchor or a Stromling Ape's anchor.

A Stromling Ape makes a cameo appearance during races held at Dragonmaw Chasm in Forbidden Valley. When players drive through the Stromling-infested tunnels underneath Paradox Refinery, the Stromling Ape can be seen watching the race from the right side of the tunnel and occasionally beating its chest with its fists, as if preparing for a ground pound.

History: Far more imposing than Pirates or Admirals, Stromling Apes are the greatest threats facing the Nexus Force in Gnarled Forest. Eager for his forces to win the fight against Captain Jack Knife and his Venture League crew, the Darkitect sought to create an ally for his Stromling Pirate Armada early on in his reign. Looking deep into the jungle for creative inspiration, the nefarious villain discovered a thundering ape and mimicked its colossal form, twisting its image into that of a menacing, aggressive Maelstrom servant.

Truly imposing foes, Stromling Apes have taken up defensive positions in strategic locations around Gnarled Forest. One particularly menacing Ape blocks the main pass into the Pirate Camp. He has proven more than a match for lightly armored Nexus Force members in the past – new recruits wearing anything less than Rank 2 Faction Gear should rely on tactics, planning, and teamwork to best this fiend and pass into the Pirate Camp.

Some Stromling Apes have been reported to carry parrots looted from pirate travelers ambushed while passing in and out of Jack Knife’s Camp. Defeating an Ape in possession of such a feathered friend will allow you to inherit it.

Impressed with how effective Stromling Apes became at pestering the Nexus Force, the Darkitect later returned to Gnarled Forest in search of lieutenants for his growing Maelstrom legion. Searching deeper into the jungle than before, he discovered two towering, massive silverbacks, stronger and more fearless than any other Apes in the forest. Each was the proud leader of its tribe. Calling on the forces of chaos, the Darkitect stole their forms, perverting their essences into two of the most aggressive, black-hearted fiends in the Maelstrom – Kinga Hurl and Roo Morgg.

Attacks: Ground Pound: Short Ranged Area Attack that deals 5 damage to nearby targets. Strikes 3 times per attack. To aid adventurers without Rank 2 Faction Gear in their fight against Apes, the Venture League has buried heavy anchors in some of the Apes’ favorite spots. When an Ape Ground Pounds, the pieces of these anchors will be shaken loose to the surface, after which they can be quick-built and dropped on the Ape’s head for very high damage.

Exploding Boulder Throw: Long Ranged Attack that deals 5 damage to targets around the point of impact.

Tactics: Minifgures with Rank 1 Faction Gear should not attempt to fight a Stromling Ape alone, as both of its attacks will likely smash you in one hit. If you are wearing Rank 1 Faction Gear, the Paradox recommends gathering a team before charging a Stromling Ape. Not only will teaming up make it easier to smash the Ape, but it will also allow all team members to share in its valuable loot.

Using careful timing, wait until the Ape has finished all three strikes of its Ground Pound, then charge. Once you cause 25 damage, the Ape’s armor will break, causing it to become dazed and confused for an extended period of time. While the Ape is befuddled, build the anchor quickly – it will usually smash the stunned gorilla.

Unfortunately, not all tactics are to be trusted. For instance, Bert Scurvyburp has a theory that if you eat bananas near Stromling Apes, they’ll become temporarily distracted. This is not an effective strategy, unless your goal is to become a large banana pudding. And there are no Factions in the Nexus Force for banana pudding. 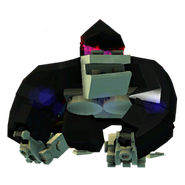 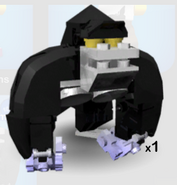 A Stromling Ape in a Scheduled Maintenance patcher

Stromling Ape at the log-in screen 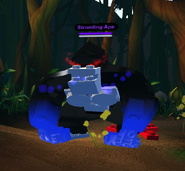 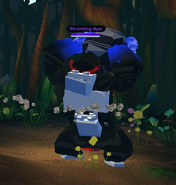 A Stromling Ape throwing a boulder 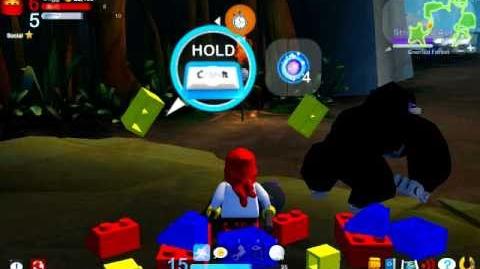 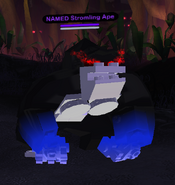 NAMED Stromling Ape
Add a photo to this gallery
Retrieved from "https://legouniverse.fandom.com/wiki/Stromling_Ape?oldid=159007"
Community content is available under CC-BY-SA unless otherwise noted.