Unconfirmed Name: Although this article is based on real information, the name is unconfirmed.

Beck Strongheart sends players to rebuild Stromling Mechs into turrets. Although no other missions require players to do this, NPCs such as Epsilon Starcracker will frequently remind players that this can be done when players must battle mechs. 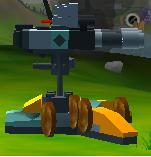 A Stromling Mech turret in-game
Add a photo to this gallery
Retrieved from "https://legouniverse.fandom.com/wiki/Stromling_Mech_Turret?oldid=126204"
Community content is available under CC-BY-SA unless otherwise noted.