Stromling Pirate Invaders are the stronger variety of Stromling Pirate found on Crux Prime. They have the same physical appearance and attacks as their lesser brethren, but are much more powerful and have a different, darker texture. These enemies have 11 health. They are led by Gull Rawstew, who spawns to inspire his troops. 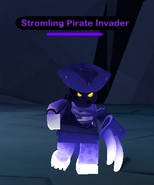 A Stromling Pirate Invader in-game
Add a photo to this gallery
Retrieved from "https://legouniverse.fandom.com/wiki/Stromling_Pirate_Invader?oldid=125076"
Community content is available under CC-BY-SA unless otherwise noted.