Swifty McGurk is a Racing Pirate NPC in Gnarled Forest.

Swifty McGurk can be found in Gnarled Forest's Race Place, located near Crocodile Corner. After completing her missions at Vertigo Loop Racetrack, players are sent by Velocity Lane to speak with Swifty McGurk. Swifty McGurk acts very dismissive and grouchy towards players, who must gain his respect by completing his missions on the Keelhaul Canyon Raceway.

First, Swifty McGurk wants players to get in the Winners' Circle of a Keelhaul Canyon race by getting third place or better. Then, he wants players to beat his personal best lap time of 1:45.

Feeling that they are ready for new racing challenges, Swifty McGurk sends players back to the Nimbus Station Race Place to speak with Velocity Lane.

During a Grand Prix competition held at Keelhaul Canyon Raceway, Swifty McGurk expressed skepticism in players' ability to master the dangerous jungle labyrinths of his favorite racetrack. He recommended that players stick with Dragonmaw Chasm Raceway, which he referred as a much less dangerous venture, and leave Keelhaul Canyon to his fellow brawny pirates.[1]

Swifty McGurk was originally named Gangway Kelley prior to alpha testing, although his role was identical to his current role.[2] A texture titled "Torsos_NPC_GangwayKellyswf_I5" and a model titled "minifig_accessory_GangwayKelly_Hat" have been found in the game files, but these appear to be for another Nexus Force character, implying that the name Gangway Kelley may have been intended to be reused.

When first introduced in early beta testing, Swifty McGurk was incorrectly given Captain Jack Knife's model and Bob's textures, causing a pinkish tinge to his skin. This was fixed on March 25th, 2010. During early beta testing, players could not talk to Velocity Lane. Therefore, to receive their first chassis and racecar module pack, they had to speak with Swifty McGurk instead. 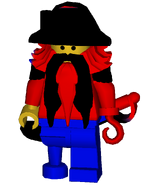 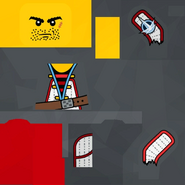 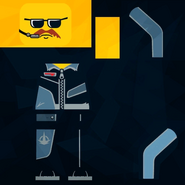