A team is a special system of grouping used to allow equally divided or free-for-all loot among 2 to 4 players in LEGO Universe. The team system is used in minigames and anytime when possible. Some special abilities, such as the Assembly's armor repair or Paradox's imagination restore, will affect teammates. While in a team, many missions and achievement goals can be completed faster (x4 faster if all work equally) because each team member's smash will count towards each individual's Achievements in the team (i.e. if a team member smashes an enemy, it still counts toward any qualifying mission or achievement to all of those in the team, facilitating achievements experience). However, teammates that are in different worlds will not partake the achievements done by the ones in the activity since the player is not participating. This was also true if the player was in a different dimension of the same world. 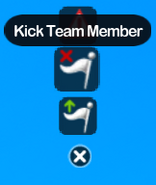 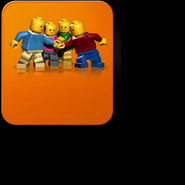 Unused Alpha team UI artwork
Add a photo to this gallery
Retrieved from "https://legouniverse.fandom.com/wiki/Team?oldid=157995"
Community content is available under CC-BY-SA unless otherwise noted.