Theo Balfour is a Sentinel Faction Grunt NPC who guards the tunnel to the Avant Gardens Monument.

Theo Balfour does not let players pass to the Monument until they have authorization from Beck Strongheart. He sends players to check in with Rusty Steele the Assembly Foreman at the Monument's base, since players will have to ascend the Monument to reach the Launch Area and thus travel to Block Yard to confront the Maelstrom Spider Queen.

In alpha testing and early beta testing, Theo Balfour was unnamed and simply identified as Sentinel Grunt. In alpha testing, Theo Balfour wore a visored hi-tech Knights Helmet and a Breastplate of Armor; in early beta testing, his helmet's visor was removed. Until the Crux Prime update, Theo Balfour carried a unique spear design used by various Sentinel characters but never seen in an actual LEGO mold. In the Crux Prime update, this spear was replaced with one that combined the standard spear mold with a 1x1 cone brick.

Until the Power of the Nexus Force update, Theo Balfour could be found in the Sentinel Encampment. He wondered what the Assembly has been up to since erecting the Monument to honor the battle against the Maelstrom.

Theo in alpha and early beta 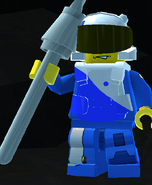 Theo in-game as of the Power of the Nexus Force update
Add a photo to this gallery
Retrieved from "https://legouniverse.fandom.com/wiki/Theo_Balfour?oldid=126214"
Community content is available under CC-BY-SA unless otherwise noted.