Toshiro Gojira is a guard NPC on the Ninjago Battlefield outside the Ninjago Monastery. When Shouty McBullhorn sends players to Ninjago, he tells them to meet up with Toshiro. Toshiro then directs players inside to talk to Sensei Wu.

Once players complete Cole's missions, Toshiro gives daily missions to smash skeletons and their on the Battlefield, rebuild Maelstrom Weapons Crates, Siege Shields, Catapults and Ladders, and to gather items from Johnny Umami for him, with rewards of Cotton Polish or Old Sushi. 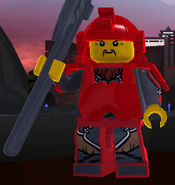 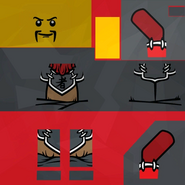 Add a photo to this gallery
Retrieved from "https://legouniverse.fandom.com/wiki/Toshiro_Gojira?oldid=136082"
Community content is available under CC-BY-SA unless otherwise noted.