Around the LEGO Universe, buried treasure is hidden. Digging it up can make for some very nice rewards! To use a Treasure Chest, however, the player must have a pet, acquired with Coalessa's help, and they also must complete the mission chain for Bella Pepper in Pet Cove. Once they have completed these, all treasure chests become accessible for them to use. It is interesting to note that these treasure chests change to bones when you have your Skeleton Dragon Pet out.

The most common reward for digging up a chest is a few bricks, although these will change according to area. For example, players are more likely to find basic bricks in Avant Gardens than elsewhere in the Universe. Models dug up in each area also depend on the player's location. For example, the 'toy truck' and 'toy excavator' models are only likely to be dug up in Nimbus Station. Occasionally players may dig up an item or a model, but using the Lion Pet increseases these chances. In Gnarled Forest, several of the hidden flags require a pet to dig up the applicable treasure chests to make them visible.

Treasure Chests can be found on all worlds, with the exception of the Venture Explorer, Starbase 3001 and the LUP worlds created by the World Builder League (Portabello, Robot City, Deep Freeze and Moonbase). One can be found in Crux Prime, but this yields nothing until you acquire a mission from Sensei Wu. Generally, chests are hidden on paths or in relatively easy-to-reach areas.

Some treasure chests in Gnarled Forest require you to use Red X quickbuilds. One of these is on an off-shoot to the path to the chasm. Another is hidden behind a Maelstrom Ape. There is one of these X-builds in Avant Gardens, however, this is tied to a mission given by Captain Jack Knife.

In Nimbus Station, Johnny Thunder provides a mission chain to locate and recover a number of chests from each world after players have joined a faction. When a mission to a specific world is taken, the chests become visible to the player doing the mission. Recovering the floating treasure chests will not provide a reward in itself, but completing the mission for a specific world will reward the player with a bag of 10 or 15 Faction Tokens. The chain includes recovering chests from Nimbus Station, Avant Gardens, Gnarled Forest, Forbidden Valley, Crux Prime, Nexus Tower, and Ninjago Monastery. Recovering all the chests from a specific world will also unlock the "*Insert World* Treasure Hunter" achievement.

In various battles and instances, players will be rewarded with a treasure chest packed with items. For example, each Maelstrom Dragon defeated in the Forbidden Valley Dragon Battle instance will provide a treasure chest. Defeating Butterscorch will provide a chest, as will defeating the final boss in the Battle of Nimbus Station instance. Loot selections are limited to what is available in each world, but always include a small amount of coins. Here is a basic list of loot provided by each reward chest.

Loot chests tend to go to whoever struck the 'final' blow to the target, and will be shared by their team, if applicable. Unfortunately, this has led (to the annoyance of many players) to a risk of loot stealing in Crux Prime, where it is possible to complete the smash of someone else's dragon and thus acquire the loot. 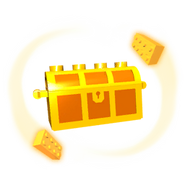 A Loot Chest from Alpha

A Loot Chest from Alpha 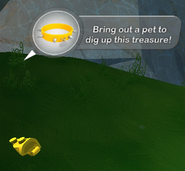 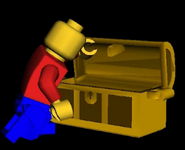 Animation of a minifigure opening a treasure chest

The screen shown when choosing loot from treasure chests

The box shown when opening a treasure chest in Alpha
Add a photo to this gallery
Retrieved from "https://legouniverse.fandom.com/wiki/Treasure_Chest?oldid=154490"
Community content is available under CC-BY-SA unless otherwise noted.