A Triceratops is a dinosaur pet found in Avant Gardens.

A group of wild Triceratops reside on a plateau at the rocket landing pad near the Paradox Research Facility. The plateau can only be accessed by using another pet to dig up a buried Treasure Chest and activate a Pet Bouncer, requiring players to learn how to tame pets from Coalessa and how to use Pet Digs from Bella Pepper at Pet Cove. To tame a Triceratops, players must assemble a trumpet model. Once tamed, Triceratops pets can dig up buried Treasure Chests and activate Pet Bouncers.

While Triceratops pets remained virtually unchanged throughout beta testing, the plateau where wild Triceratops reside was once home to an unusable Launchpad and one of Johnny Thunder's Floating Treasure Chests. Both of these were removed in mid-beta testing. Following the Crux Prime update, the Triceratops area was given a Bone Dig for Skeleton Dragon pets to excavate. 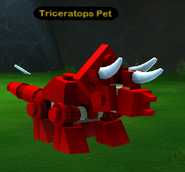 The beta Triceratops area, with removed treasure chest and launchpad

The released Triceratops area
Add a photo to this gallery
Retrieved from "https://legouniverse.fandom.com/wiki/Triceratops?oldid=139758"
Community content is available under CC-BY-SA unless otherwise noted.