Vacuum Tubes are devices used in the Assembly areas of Nexus Tower to transport players around.They serve as the Assembly's form of speedy transport around the tower; Moving Walkways, Paradox Teleporters, and Speed Pads serve as speed devices for other factions.

To use, players must stand in the vacuum stream, before being sent to an output somewhere else in the same area. When activated, players disasemble quickly and are sucked to a pipe (normally in the ceiling) and blasted out, reassembling in the process.

In the Assembly Storeroom, the Vacuum Tubes use the same pipes as Brick Warps, utilizing the already-pumping air to transport players between both rooms.

In the hallway, players can walk into a pipe to be transported to a platform near the ceiling. From this platform, they can collect a flag, or jump into another tube to be thrown further down the hallway.

Render of Bob using a Vacuum Tube, viewed in the Passport

A tube intake in the Hallway

The tube output in the Hallway 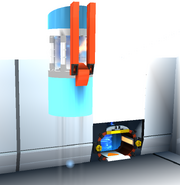 An intake in the Assembly Storeroom

An output in the Storeroom

Add a photo to this gallery
Retrieved from "https://legouniverse.fandom.com/wiki/Vacuum_Tube?oldid=140719"
Community content is available under CC-BY-SA unless otherwise noted.