A ninja warrior, Vanda Darkflame's background is shrouded in mystery. Some sources suggest that she was an archaeologist, while others claim that she was a ninja princess. Vanda Darkflame believes that to defeat an enemy you must understand it and, if possible, turn its own power against it. She is cynical, selfish, decisive, and always fights for what she feels is right, no matter what anyone else may think about her heartless methods.[1]

Vanda Darkflame was once the protégé of Baron Typhonus. One day, the Baron left her in charge of his work while he and Doctor Overbuild searched for Planet Crux. After the fateful event that shattered Planet Crux and created the Maelstrom, Vanda was recruited by Overbuild, Hael Storm, and Duke Exeter to form the Nexus Force.

However, the four leaders of Nexus Force clashed over the best way to defend the LEGO Universe, and so each created their own faction. Believing that studying and understanding the Maelstrom were key to defeating the dark menace, Vanda Darkflame founded Paradox for Space Marauders, Sorcerers, and Shinobi across the LEGO Universe.

Vanda Darkflame made her first appearance in the "Answer the Call" LEGO Universe trailer, in which she, Hael Storm, Doc Overbuild, and Duke Exeter led the charge against the Maelstrom's forces in the Battle of Zorillo Plaza. In the trailer's remake, she is also seen gearing up with Hael and Duke in a castle and later fights a Maelstrom Dragon.[2] In the Battle of Nimbus Station based upon this trailer, Vanda Darkflame and the other faction leaders were led into a trap by disguised Stromlings.[3]

Of all the Faction Leaders, Vanda Darkflame has the most important role in The Great Minifig Mission, as she was the mysterious Minifigure who initiated the mission. Bradford Rant Institute of Cosmic Kinesis discovered a video recording of Darkflame explaining the mission's purpose to send Minifigures into the LEGO Universe. Mission 2 reveals that Vanda Darkflame was the Baron's assistant. Mission 13 details the founding of Sentinel Faction, and Duke, his weapons, and the Sentinel emblem appear in the mission's puzzle. In Mission 14, players must open a capsule containing information on Vanda Darkflame. In Mission 19, players play as Vanda Darkflame as she navigates the Stromling-infested Maelstrom Trench, which reveals more information on Sentinel Faction.

When players clear Raven Bluff of Maelstrom, Vanda Darkflame sends them a letter in their Mailboxes, recommending that they use Raven Bluff for ninja-themed Properties.

If players join Paradox, Vanda Darkflame sends a letter to their Mailboxes telling them about collecting Paradox Faction Tokens in order to purchase better gear. Upon reaching Rank 2, players receive another letter from Vanda Darkflame, who deems players ready to enter Forbidden Valley and face the dangers lurking there.

Prior to the battle for Crux Prime, Vanda Darkflame wrote a news report detailing information Missions offered in Crux Prime.[4] Vanda Darkflame later designed Paradox vehicles, such as the Darkwarp Rocket and the Blindsider Race Car.[5] After discovering a way to harness the power of Imagination in its purest form, Vanda Darkflame and the other Faction Leaders designed Valiant Weapons.[6]

In Nexus Tower, Vanda Darkflame spends most of her time studying the Maelstrom in the Paradox Laboratory. Paradox agents are sent by Nexus Naomi to speak with Vanda Darkflame, while other players are sent by their Faction Leaders. Vanda Darkflame tests players' courage by telling them to look into the Shadow Orb, advising them not to shy away from the visions they will see. She sends Nexus Naomi approval for Paradox agents to open a Vault account, while she sends other players back to their Faction Leaders.

Paradox agents are sent to talk to Hael Storm, Duke Exeter, and Doctor Overbuild about the true fate of Baron Typhonus. Vanda Darkflame finds it difficult to accept that her old mentor created the Spider Boss and betrayed the others, but she wishes to know more about the visions she sees in the Shadow Orb. Hael and Duke try to hide the truth from her, but Vanda is troubled by Overbuild's confirmation that Baron Typhonus is now the Darkitect.

To help Rutger Hemoglobin in his experiment to create a purple clothing dye, Vanda Darkflame assigns players with the task of collecting ten Maelstrom samples from Skulkins mining in the Maelstrom Quarry.

Wishing to know more about the secrets of her fellow Faction Leaders, Vanda Darkflame secretly assigns her Paradox spies with the task of purchasing disguises from Sutoro Hatto and eavesdropping on Duke Exeter, Albert Overbuild, and Hael Storm. She is surprised to learn nothing more about the Baron from Exeter, amused to find that Overbuild likes to dance to Gween Tweenbangle's music, and intrigued by Storm's interest in the Imagimeter Shards. As a reward for their services, Vanda Darkflame sends players to Coalessa to learn about taming their own Alien pet.

Nexus Naomi tells players to speak with the Faction Leaders about building a Property Safe. Vanda Darkflame recommends seeing Numb Chuck in order to get a device to link their Property Safes to their Vault accounts, which can only be accomplished with Paradox technology.

In a contest, Vanda Darkflame asked players to submit original designs for Stromlings to Professor Brickkeeper in the Creation Lab, so that Paradox could study these designs and prepare Nexus Force to face such monsters.[7] At the first weekly Nexus Force Council meeting held in the Venture League Map Room, Vanda Darkflame promised to bring cake.[8] 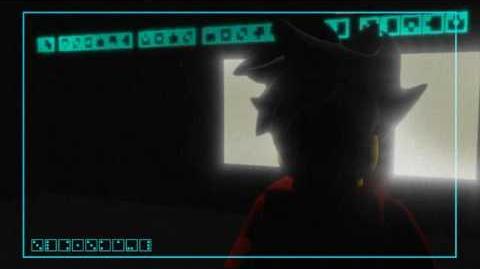 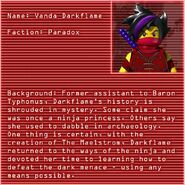 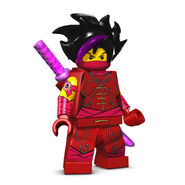 Vanda Darkflame on a Paradox banner 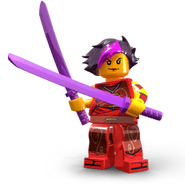 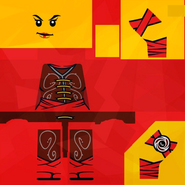 A promotional statue of Vanda Darkflame at E3
Add a photo to this gallery
Retrieved from "https://legouniverse.fandom.com/wiki/Vanda_Darkflame?oldid=159229"
Community content is available under CC-BY-SA unless otherwise noted.