After the Monument Finish Line is built, Vector Longview assigns Daily Missions to partake in the Monument Race.

In alpha testing and early beta testing, Vector Longview was unnamed and simply identified as Assembly Surveyor. She remained an Assembly Surveyor until the Power of the Nexus Force update, in which her character was merged with Kit Wanderwhere.

In alpha testing and early beta testing, Vector Longview had a yellow construction hat and did not wear Faction Grunt gear. The textures on her sleeves and legs were not as detailed. She wore dark-gray gloves and had a dark-gray hip piece. In mid-beta testing, she received her Faction Grunt helmet and armor, but all other differences remained until late-beta testing.

Although Vector's texture was changed to a Venture League Scout, the message viewed before building the Monument Finish Line still displays her Assembly Surveyor CGI, although this would likely have been corrected in a later patch if the game had not been closed. 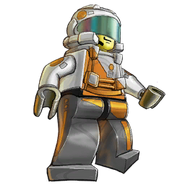 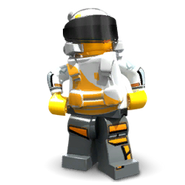 Vector Longview as an Assembly Surveyor

Vector's new texture next to a displayed image of her old one
Add a photo to this gallery
Retrieved from "https://legouniverse.fandom.com/wiki/Vector_Longview?oldid=125308"
Community content is available under CC-BY-SA unless otherwise noted.