Velocity Lane is a Racing Trainer NPC at the Nimbus Station Race Place. She is the sister of Sky Lane and Peppermint Lane.

Velocity Lane does not allow players on the racetrack until they have joined a Nexus Force Faction. When players are ready to race, Velocity Lane sends them to purchase a Car Chassis from Ludwig Clutchburn and gives them a free Hyperstarter Package to build their own Race Car. Then, she allows players to drive their new Race Car on Vertigo Loop Racetrack. Next, Velocity teaches players about Imagination Boosts and instructs them to collect nine Imagination Orbs during their next race. To test their skill, Velocity Lane challenges players to place in the Vertigo Loop Winners' Circle, beat her best lap time of 1:15, and win a race at Vertigo Loop.

Velocity Lane, like her sisters Sky and Peppermint, is also a bowler. The Bowling Lanes, as the three Lane sisters call themselves, get together for bowling nights, which prompts Sky Lane to send players on a mission to retrieve spare cannonballs.

Velocity Lane encourages players to use their creativity to build their own Race Cars at home or on their Properties. To teach them the basics of designing LEGO Universe Race Cars, Velocity released instructions on how to build a Car Chassis, knowing that the internal frame is a crucial part of the car. [1]

In early beta testing, Sky Lane appeared at the Nimbus Station Race Place. Although she had no dialogue or missions, it was originally intentioned that Sky Lane would have reappeared at the Race Place to train new racers.[2] However, since Sky Lane did not offer missions during this time, it was required to speak to Swifty McGurk to receive a Car Chassis and Hyperstarter Package.

In mid-beta testing, Sky Lane's reappearance was replaced by her newly-introduced sister, Velocity Lane. At this time, players were not required to join a Faction before accepting her missions. Velocity's first mission, Get Ready to Race!, originally sent players to speak with Leland Hammertoe and complete his Foot Race challenge to prove that players are fast enough to race.

Velocity prior to the Starbase 3001 update 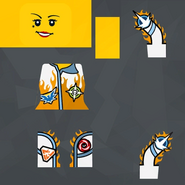 Velocity Lane's texture
Add a photo to this gallery
Retrieved from "https://legouniverse.fandom.com/wiki/Velocity_Lane?oldid=142817"
Community content is available under CC-BY-SA unless otherwise noted.