Wenn Wuzzit paces around frantically beside his Time Twister machine located near the Launchpad to Avant Gardens. After players join a Nexus Force faction, Wenn Wuzzit tells players about the Battle of Nimbus Station and, in exchange for Green Imaginite Crystals, he lets players use his Time Twister to travel back in time to relive the famous battle. Wenn Wuzzit assigns Missions to fight and smash each of the four commanders of the Stromling army: Murgle Blotch, Kinga Hurl, Whack Bliddo, and the Four Riders of the Maelstrom. As these commanders are defeated, Wenn Wuzzit feels the shockwaves of their demises rippling through time and congratulates players on saving Nimbus Station in the past.

On the weekend of August 13-14, 2011, Wenn Wuzzit's Ultra Transchrono Noggulattor allowed him to realize that a secret source of seventeen googletons of chronomorphular Maelstrom was passing through the quantum scaffolding of space time, allowing it to seep into the fabric of Nimbus Station's past and head for the pivotal historic Battle of Nimbus Station to mucklify the Minifigures' plane of existence. In order to recompromise the properties of plastonic mechanics, Wenn Wuzzit sent players back in time to force the Maelstrom out of that timeline.[1] 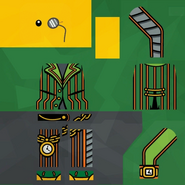 Wenn Wuzzit's texture
Add a photo to this gallery
Retrieved from "https://legouniverse.fandom.com/wiki/Wenn_Wuzzit?oldid=131322"
Community content is available under CC-BY-SA unless otherwise noted.